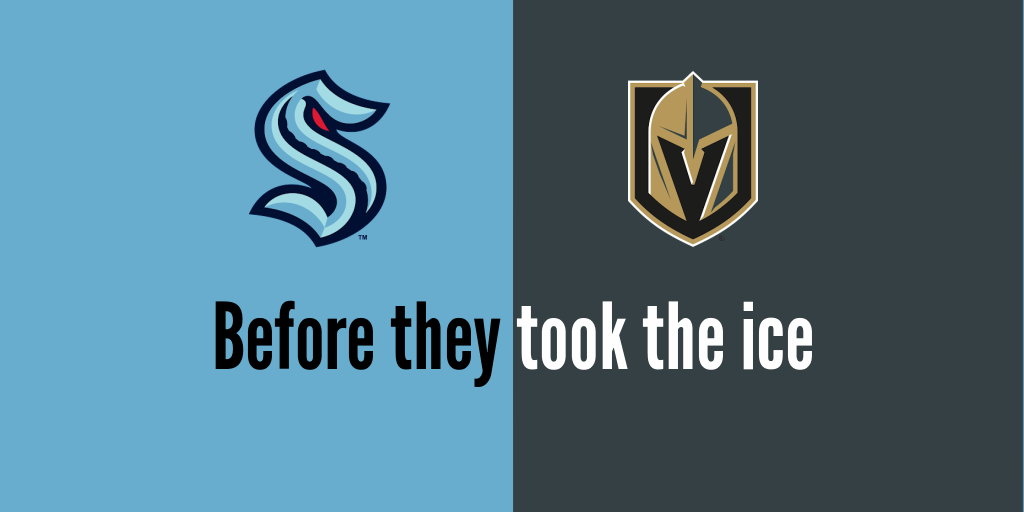 Opinions about the Seattle Kraken roster are all over the map. Some people project them to be second in the Pacific Division while others think this group leaves much to be desired, but no one really knows how they will be until they get some games under their belt. It is always fun to remind people, however, that no one projected the success of the Golden Knights in year one. With this in mind, we thought it would be a nice exercise to compare the offensive statistics of the Seattle Kraken and Vegas Golden Knights rosters heading into their respective inaugural seasons.

Vegas’ top centers going into the 2017-18 season were Jonathan Marchessault, William Karlsson, Pierre-Edouard Bellemare, Cody Eakin, and Brandon Pirri. Vegas also had Vadim Shipachyov on the roster, but for the purposes of this exercise, we are excluding him from the analysis.

The Seattle Kraken roster has eight players that could play center, but for the purposes of this exercise, we are assuming Calle Jarnkrok and Alexander True will either play wing or in True’s case not be one of the top five centers. Marcus Johansson will also likely play some of each, but we’re counting him as a center here. That leaves Alex Wennberg, Yanni Gourde, Johansson, Colin Blackwell, and Morgan Geekie as the comparable group to Vegas.

Here is a breakdown of goals per game by player.

Looking at the wings in Vegas for that inaugural season, we are including Alex Tuch, David Perron, Erik Haula, James Neal, Oscar Lindberg, Reilly Smith, Tomas Nosek, and William Carrier. Vegas added Ryan Carpenter on waivers and acquired Ryan Reaves and Tomas Tatar around the trade deadline late in the season. Because they were not on the roster to start the season, they are excluded from the analysis.

For Seattle, we are including Brandon Tanev, Calle Jarnkrok, Jaden Schwartz, Jared McCann, Joonas Donskoi, Jordan Eberle, Mason Appleton, and Nathan Bastian. As mentioned above, Blackwell or Johansson will probably play wing from time to time, but we already included them in the center category and did not want to double count. Jarnkrok, McCann, Bastian, and Appleton can all play center as well, but for now we are slotting them in at wing.

Here is a look at the numbers.

Here is a look at the player detail of goals per game.

Vegas saw big increases in production from Haula, Smith, and Tuch. Collectively they would add 36 more goals in 2017-18 than they produced in 2016-17.

Seattle’s defense is commonly regarded as the strength of the team, and it certainly shows in the offensive production numbers in the graph. Here is the player breakdown.

Vegas only saw a mild increase in goal production from their defensive corps during the 2017-18 season.

Seattle is not Vegas

Looking at goals, assists, and points per game is a very simple way to evaluate the Kraken roster and should not be taken as a testimonial that Seattle will be better than Vegas in season one. Vegas really took advantage of some players having career years during the 2017-18 season.

Are there players in Seattle that can have similar breakout years? TBD, but in the meantime the Kraken roster looks more productive offensively than a lot of people think.