Will Matty Beniers sign with the Seattle Kraken or return to Michigan? 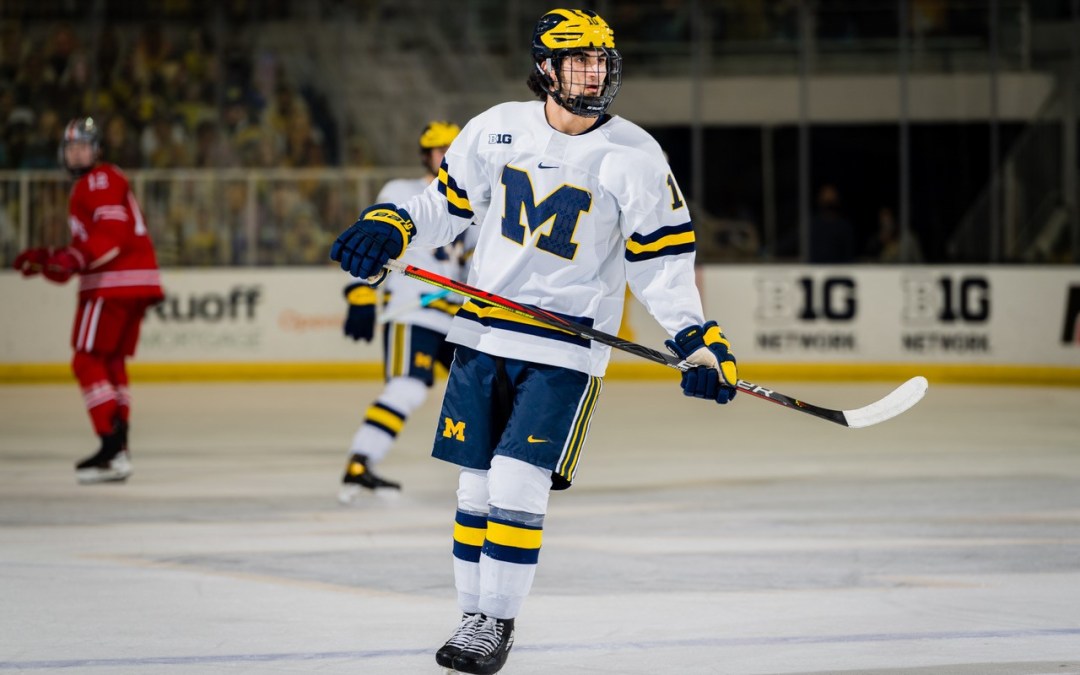 Seattle Kraken first-round pick Matty Beniers has a big decision to make over the next month, and it’s one that has no wrong answer. Does he return to the University of Michigan for his sophomore season or sign on with the Kraken to play in the NHL this year?

It’s a good spot to be in. Imagine trying to decide if you should go back to school for another year knowing you have the dream job of all dream jobs waiting for you afterwards.

The Kraken selected Beniers, 18, with the second overall pick in July’s NHL Entry Draft, and history shows that he should matriculate to the NHL this coming fall. In most seasons, the second pick in the draft plays in the NHL right away, but it’s not a sure thing.

Last year, Quinton Byfield was selected second overall by the Los Angeles Kings but only got a brief sniff of the NHL. He was allowed to play in the AHL, for the Ontario Reign, due to an exception that allowed Ontario Hockey League players who had signed NHL entry-level contracts to stay in the AHL since the OHL canceled its season. Byfield played 32 AHL games and just nine in the NHL.

In 2014, the Buffalo Sabres took Sam Reinhart second overall. After his nine-game tryout at the start of the season, he was sent back to the WHL’s Kootenay ICE for the remainder of the year.

So, it’s not unprecedented for the second overall pick to not play full time in the NHL the following season.

Beniers, in a moment of maturity, said after the draft that he wasn’t sure what the best path forward was for him. It’s something he planned on talking to the team and his family about.

The Kraken will have to decide quickly if they think the NHL is his best road to development. Beniers cannot participate in the main Seattle training camp in September without signing his contract, thus losing his NCAA eligibility. So the Kraken won’t get the benefit of seeing him train with their NHL roster prior to making a decision.

Nonetheless, that decision will be needed quickly as Michigan hockey players report to school on Aug. 23 and begin practice on Aug. 30.

Is Matty Beniers’ game ready for the Kraken and the NHL?

Despite what the team or player wants, the biggest factor is whether Beniers is ready for the big leagues. He’s still young – he’ll turn 19 in November – but the NHL is a younger league than in the past, and there are plenty of players who have started at the same age.

“Every kid’s different,” Seattle general manager Ron Francis said. “I think the key is when you go and see him play, you want to do what’s right for the kid and make sure that you’re not rushing. Because the NHL is a heck of a league where the big guys are strong guys and fast guys and you want to make sure that when you bring them in, you’re giving them the opportunity to be successful. We try and analyze that.”

The evidence suggests that Beniers may be ready to skate with and against older players.

At Michigan, as a freshman playing against older players, he was a point-per-game player and made Team USA for January’s World Junior Championships in Edmonton. Beiners was one of the youngest players in that tournament, and while he scored just one goal and two assists in seven games, he was noticeable for the Americans. He played a tough defensive game, was on the penalty kill, and drove possession for the gold medal winners.

After his season in Michigan ended, he once again played for the U.S., this time at the IIHF World Championships. Playing against NHL and pro players, Beniers held his own once again as the U.S. won bronze.

“Matty adjusted so well and if you didn’t know that he’s such a young player you would think that he’s one of the older guys and a veteran.” Kraken director of amateur scouting Robert Kron said after the Draft. “That speaks very highly about his ability to read the game and play at a very high level and not many kids that age get to play in the tournament.”

Based on his on-ice performance, he looks ready to take the next step.

That doesn’t mean there still isn’t work to do or refinement of his game and skill set. He’s not resting on his amateur resume to guarantee anything at the next level.

“I think for me it’s continuing to get bigger and stronger,” he said. “I think that’s something I focused on a lot this year at Michigan. I’m trying to score goals, producing more offensively, and playing my two-way game so not totally sure how far out I am but I think I think I’m pretty close. I’m working hard and I’ll be there soon enough.”

The case for staying at Michigan for Beniers

Sure, another year of development in college wouldn’t hurt, but there might be a more attractive and more fun reason for Beniers to return to the Wolverines this season.

“I want to make a run at the National Championship,” he said.

Michigan lost a chance to make such a run last year as a Covid outbreak resulted in the Wolverines being disqualified from the tournament. It might seem overconfident to assume that Michigan could make a run, but when four of the top five picks from the NHL Draft could all be back in Ann Arbor this season, it’s more of a reality.

If Beniers were to return, he could be joining defenseman Owen Power – taken first overall at the draft by Buffalo – along with Kent Johnson (taken fifth by Columbus) and incoming freshman Luke Hughes (taken fourth overall by New Jersey). That’s an impressive core.

Power has hinted that he’s leaning toward returning to Michigan for one more year which could influence the rest of the drafted Wolverines.

Along with a lot of winning, the other draw of returning would be to have a normal college experience. Beniers and his fellow Wolverines took classes online last year and played games in front of an empty Yost Arena – normally one of the loudest in the NCAA.

The case for signing with the Kraken now

If Beniers is ready for the NHL game, then signing and playing right away would be beneficial.

Seattle can use help up the middle, and Beniers is a player whose ceiling is that of an elite center – the most important position on a hockey team. Obviously, at his age he’s not that player yet, but his two-way game means that he could play and be productive right away as a third- or fourth-line center. He plays at both ends of the ice already and could contribute solid minutes from the start.

There would be no pressure on Beniers to carry the club right off the bat. However, playing this year would get his feet wet in the NHL until his offensive game develops to where Seattle believes it can be.

Signing now would also kick his entry level contract into gear meaning he would be up for a raise in three seasons, something that could end up paying off for him financially. For the Kraken, having the franchise’s first NHL Draft pick on the club for day one, year one, would help cash in on the excitement for the neophyte team.

Will he or won’t he?

The drama, such as it is, will be over quickly with Beniers.

With Michigan hockey starting late in August, we should hear which direction Beniers plans on going soon. What most likely will happen is that he returns to Michigan but signs with the Kraken at the end of the season.

This is something that the NHL has seen before, and recently.

The Vancouver Canucks went with a Michigan guy, defenseman Quinn Hughes, with the sixth pick of the 2018 NHL Draft. Hughes decided to forego signing and returned to Michigan for his sophomore year in 2018-19. When his college season was over, he signed with the Canucks and finished the year in the NHL.

Don’t be surprised if that’s the route Beniers chooses and the Kraken first see him at the end of the season.