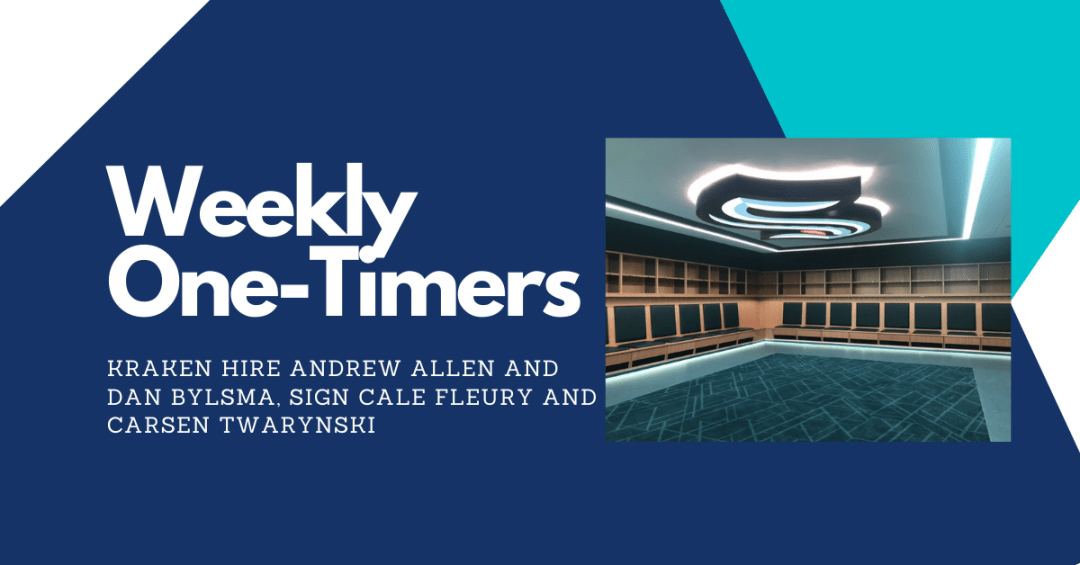 Welcome back to Weekly One-Timers, where the smoke has cleared and the temperature has fallen to a more comfortable level. The Seattle Kraken had another fairly busy week on the hiring and signing front, rounding out their coaching staff a bit more and getting two of their remaining three restricted free agents officially in the fold. Meanwhile, we at Sound Of Hockey have been hunkered down inside trying not to breathe in the poisonous air outside while also trying not to sweat our a**es off. We are thankful for the reprieve that Seattle is experiencing this Sunday.

The Kraken officially named Andrew Allen as their goalie coach this week. Allen, 45, is already a friend of the Sound Of Hockey Podcast (Episode 110), so it makes perfect sense that Seattle would hire him, being that the most important relationship already exists. But seriously, Allen is an awesome dude with a fascinating story, and his hiring comes as no surprise.

He played college hockey for the University of Vermont, then went on to play five pro seasons, bouncing back and forth between the ECHL and AHL and dressing in two NHL games for the Florida Panthers. Worth noting, Allen had a brief stint with the famed Macon Whoopee.

When his playing career ended, Allen’s coaching journey started with minor hockey in Canada, before he eventually got the opportunity to coach the Japanese national team.

“I was like a rockstar,” Allen told the Sound Of Hockey Podcast of his time coaching in Japan. “In North America, it’s like goalie-to-student ratio of three or four. They would put a kids camp on their website… It would be like a rock concert where it was sold out in seven minutes. You’d have like 40 goalies on the ice, and you’d have camera flashes coming from the crowd, and I’m like, ‘This is amazing!’ And they were so passionate about hockey. So I had such a great experience in Japan.”

Most recently, Allen was a pro scout for the Kraken, specifically focused on goaltending.

“Andrew has been a valuable member of our team over the last year and played an integral role in the Expansion Draft as our pro goalie scout,” said Kraken general manager Ron Francis via press release. “We’re proud to keep working with him as he transitions to a coaching role, bringing his wealth of experience with him to our team’s day-to-day.”

The hiring by Seattle of Dan Bylsma as an assistant coach for the AHL’s Charlotte Checkers did come as a bit of a surprise. The former Stanley Cup and Jack Adams Award winner had most recently been serving as an assistant coach with the Detroit Red Wings. In the same role but at the AHL level is not where we expected Bylsma to land, especially since he has real NHL head coaching experience and success on his resume.

Our theory (and this is just a theory) at Sound Of Hockey is that the Kraken are teeing Bylsma up to become the head coach for their AHL affiliate in Palm Springs when that team begins play in 2022-23. Time will tell if we are correct in that prediction.

Said Francis, “Dan joins our organization with an impressive resume, and his experience speaks for itself. He’s won a Stanley Cup, a Jack Adams Award, and he has a proven track record and we look forward to him coaching our prospects in Charlotte alongside head coach Geordie Kinnear.”

When the Kraken granted the Sound Of Hockey Podcast permission to interview Cale Fleury this past week, we figured it was only a matter of time before it was announced that he had been signed by the team. Sure enough, on the same day we released the episode, the team confirmed it had signed the 22-year-old defenseman to a one-year, two-way contract worth $750,000 at the NHL level.

Selected from the Montreal Canadiens over such notable veterans as Carey Price and Shea Weber, Fleury was the youngest player taken in the Expansion Draft. He joins a deep blue line and knows that he will have to fight hard to land a spot with the Kraken.

“I think for me, I’ll have to be one of the guys that’s battling for a spot, a little bit different than some of the other guys who were drafted obviously,” Fleury said in his podcast interview. “It’s not really a new position for me, it’s kind of what I’ve been in my whole career so far.”

He added that Francis “would have picked me for a reason,” and he’s absolutely right. Brother of fellow Kraken defenseman Haydn Fleury, Cale played 41 games for the Canadiens in 2019-20 but was bumped down to the AHL’s Laval Rocket this past season with the arrival of Alexander Romanov in Montreal.

“Cale is a smooth skater that has shown even at his young age to be a responsible defender that can play reliable minutes,” said Francis. “We like his mix of physicality and puck-moving skills and are excited to see him develop with our organization.”

The Kraken also announced that they had agreed to terms with Carsen Twarynski, 23, the forward that they selected in the Expansion Draft from the Philadelphia Flyers.

During his tenure in the Flyers organization, Twarynski played 22 NHL games in total, including seven in 2020-21. He also has 107 AHL games under his belt with the Lehigh Valley Phantoms, where he notched 38 points.

Local WHL fans may recognize his name, as he played major junior hockey with the Calgary Hitmen and Kelowna Rockets from 2014-15 to 2017-18.

With Fleury and Twarynski signed, Dennis Cholowski is the only remaining RFA without a finalized contract.

The Florida Panthers announced this week that “Jumbo” Joe Thornton is taking his talents to Sunrise, where he has signed on for a one-year deal at the league minimum of $750,000. This will be Thornton’s 25th season in the NHL. He has 1,529 career points in 1,680 games with the Bruins, Sharks, and Maple Leafs, and will surely enjoy being back in a place where he never has to wear a shirt.

The IIHF Women’s World Championship is finally set to begin this week in Calgary. The event was canceled altogether in 2020, then postponed and moved from Nova Scotia, where it was supposed to be played in May of 2021. Team USA begins prelims on Friday against Switzerland at 6:30 p.m. Pacific on NHL Network.

Everett Silvertips defenseman Olen Zellweger signed his entry-level contract with the Anaheim Ducks this week. Zellweger, 17, is a silky-smooth skater who had 13 points in 11 games for the Tips this past season. He was selected in the second round of the NHL Entry Draft last month, No. 34 overall, and is primed for a huge season in the WHL.

Sound Of Hockey’s John Barr visited the Kraken Community Iceplex this week. Looks like the place is coming together!