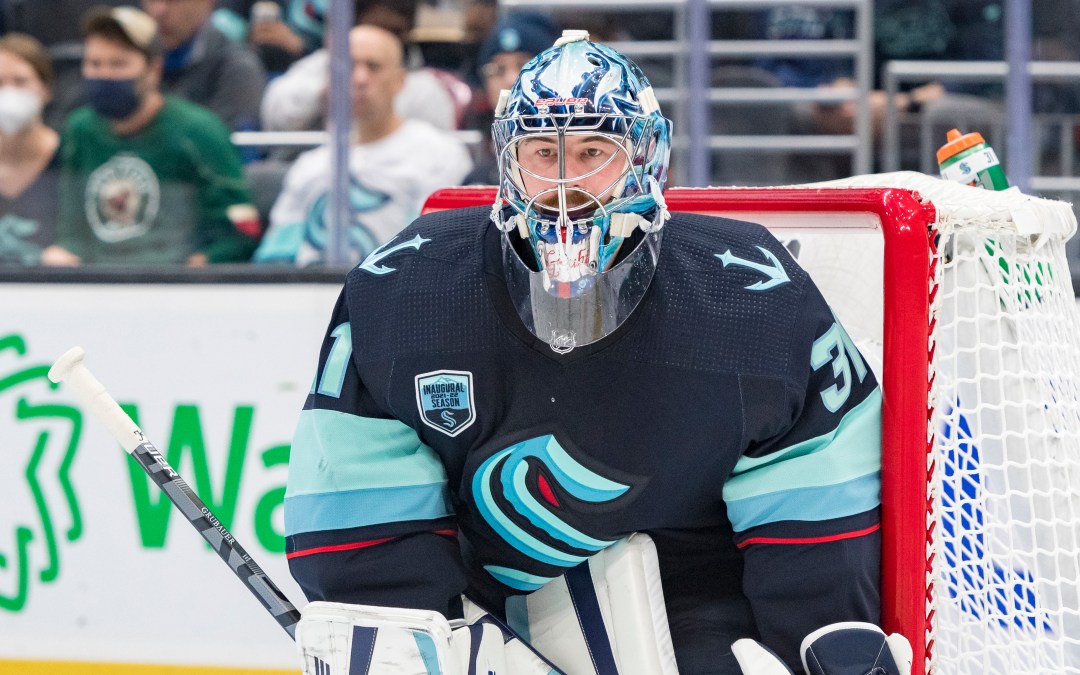 Who said low-scoring games can’t be fun? The Seattle Kraken handed the Carolina Hurricanes just their third regular-season loss on Wednesday in a gritty 2-1 game in which Philipp Grubauer again dazzled and frankly stole the ‘W.’

These last two games have represented quite the turnaround for Grubauer, who was becoming the talk of the town in a not-so-positive way up until this week. Now, he’s the toast of the town.

Coming off a six-game losing streak, everything suddenly feels different for this Seattle Kraken squad, which has won two games in a row against elite teams and now heads on the road to continue facing difficult opponents.

Here are our three takeaways from this Kraken win over the Hurricanes.

Takeaway #1: Grubauer is who we thought he was

For those that were worried Grubauer would never pan out to be the top-tier netminder Seattle thought it was getting when it signed him in the offseason, concerns now have to be allayed, at least temporarily. He followed up an impressive 37-save performance on Sunday with an arguably better 35-save performance on Wednesday for the Kraken against the Hurricanes.

In Grubauer’s recent games against Chicago, Minnesota, and even his relief appearance against Colorado, he gave up goals, but they came on chances where he was hung out to dry. There weren’t bad goals getting by him in those games, as there had been in some earlier outings. So we thought this was coming, although until fans saw him put together full 60-minute games like he has suddenly been doing, it was still easy to doubt him.

But it sure has been a treat to watch him these last couple contests, hasn’t it?

What was most impressive about Grubauer’s play on Wednesday was that the NHL’s best team (at least in terms of its record entering the game) was getting tons of traffic in front of him, and he battled through all night. Even when he wasn’t seeing it, or pucks were changing directions on the way to the net, he was in perfect position and made himself big at the top of the crease.

Grubauer downplayed it after the game, saying, “Sometimes the puck just hits you,” which drew a big laugh in the media room. There’s truth to that for goalies, though. It’s a phenomenon that can’t really be explained, but it comes with confidence and being on your game. When you’re playing well and things are going your way, pucks that you think should get by you find ways into your equipment, even if you have no idea when the shot is coming or where it’s headed. And when things aren’t going your way, pucks you think you should stop find ways through.

He did eventually expand on those thoughts. “In this league now, it’s everybody’s strategy to get one or two guys in front of the goalie, take their vision away, get in the lane so the goalie has to move,” Grubauer explained. “Some teams don’t make it as hard as other teams, and I think Carolina made it really hard. So you gotta make sure you react. If you find the puck, you gotta know what’s going around you. You can’t just focus on the puck, you gotta know where are the open guys— where’s the fifth guy? And you need to make sure you place your rebounds well.”

Coach Dave Hakstol also pointed to Grubauer’s ability to fight for saves as a key to his recent success. “The big thing for me is he’s seeing the puck,” he said. “He’s finding the puck through traffic, he looks very calm and settled. He’s a guy that reads the play very very well, and we’ve seen that for sure tonight… He had good help from the guys around him, but he was finding the puck through traffic and then able to continue battling on the second pucks.”

Takeaway #2: Can a fight actually cause a momentum swing?

Look, we get it. We honestly, honestly get it. Not everyone likes the narrative that fights can change the momentum in a game, and we also recognize that believing they can is a bit archaic. Plus, after this little exchange via the Twitter machine, we’re frankly hesitant to even bring this up.

One cannot deny the efficacy of Vince Dunn taking Andrei Svechnikov—one of Carolina’s two best offensive players—off the ice for five minutes, right in the heart of the third period in a tie game.

The fisticuffs stemmed from Dunn playing the body on Svechnikov, who entered the Seattle zone on a one-on-two rush. He tried to make a flashy play between his own legs, but Dunn read it and pushed him to the corner. The two players came together behind the goal line, and Dunn got his hands up a bit as they battled. Svechnikov apparently took offense to that and threw several punches with his gloves on, leaving Dunn no choice but to drop his own gloves and defend himself.

Not only did the fight mean that Svechnikov would not be able to participate for the subsequent five minutes, but because he started it, he got an extra two-minute minor for roughing, which was served by Nino Niederreiter.

The Kraken didn’t score on the power play, but there’s no question the two minutes of good possession helped turn the tables. In the early stages of the third period, the Kraken had been playing hot potato with the puck, turning it over consistently in dangerous areas on the ice. In the later stages, after the power play and all that possession, Seattle’s puck management improved, and eventually the Kraken got rewarded when Marcus Johansson potted the game-winning goal at 16:52.

So, perhaps the fight didn’t really create the momentum or the turning point that led to the victory, but the outcome of the fight certainly did, narratives be damned.

Takeaway #3: The Kraken had their whole team healthy… for a little while

Mason Appleton played his first game since Oct. 26, when he injured his ankle against the Montreal Canadiens. His inclusion in the lineup Wednesday pushed Nathan Bastian onto waivers to make space and meant Hakstol had his whole group simultaneously healthy for the first time this season.

That lasted all of two periods.

In the first 30 seconds of the third period, Svechnikov gave Calle Jarnkrok a cross check just outside the Hurricanes’ crease, and Jarnkrok went down on all fours. Jordan Staal then fell on top of Jarnkrok, who stayed down for a bit and eventually got up and hobbled to the bench, putting minimal weight on his left leg. Jarnkrok went down the tunnel and did not return, and Hakstol had no update after the game.

The injury could prove… painful… on a lot of levels for the Kraken. Most obviously, if Jarnkrok misses time, that means the full healthy group will have been extremely short-lived. But Jarnkrok played his best game of the season on Sunday, scoring his first two points, and looked like he was starting to finally find his game. Plus, with Bastian waived, there’s a chance the Kraken could lose him on Thursday (we will know if this happens on Thursday morning).

The timing of most of Seattle’s returns and exits into and out of the lineup have aligned quite nicely, so they’ve largely avoided having to waive players they didn’t want to waive. This one could end up stinging.

UPDATE: Bastian was indeed claimed by his old team, the New Jersey Devils.