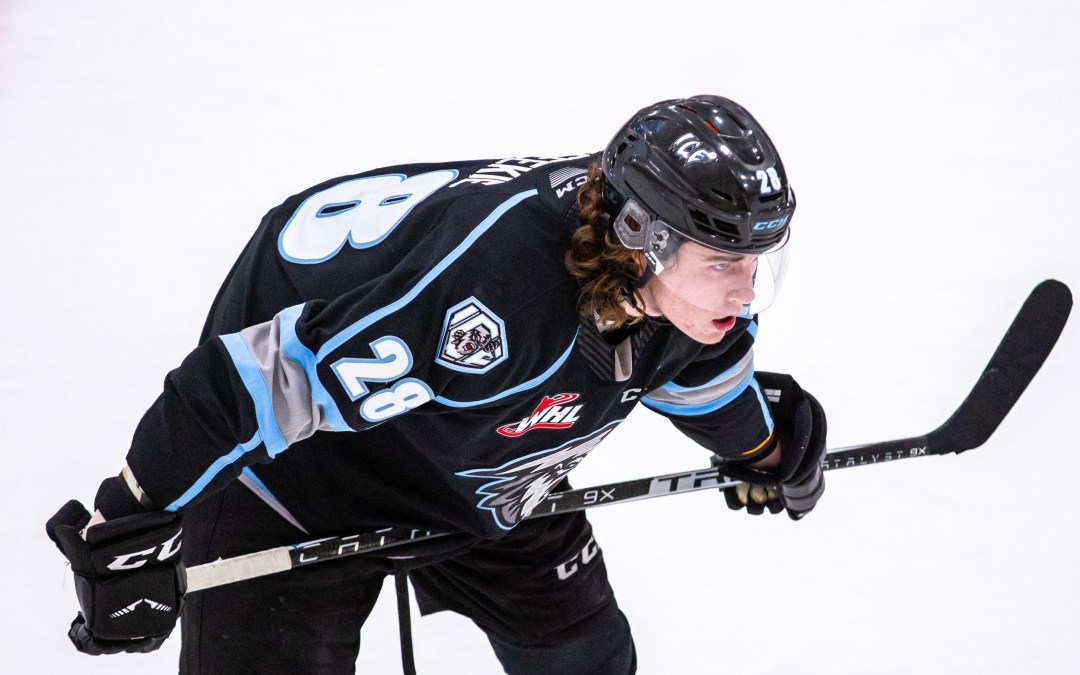 The town of Strathclair, located in southwestern Manitoba, has an average high temperature in January of eight degrees Fahrenheit, and it’s where Winnipeg ICE center Conor Geekie grew up. The cold didn’t assuage Geekie’s passion for hockey, and he was lucky to have a key to the local hockey rink. He would often use that key after getting dropped off by his mom when he was nine years old to hit the ice. Geekie didn’t have a cell phone then and remembers calling home on the rink’s landline around 10:30 at night to get picked up.

Strathclair is the quintessential small town and Geekie wouldn’t have it any other way.

“I can’t thank the town enough,” he says. “I love driving downtown and getting waves from everyone and waving back, going into the community center and walking in on the old guys playing pool and stuff like that. Going to the grocery store, knowing everyone in there, I think that’s a huge cultural thing for me, and it’s really helped me just become a better person as well, outside of hockey. It’s very important to me and my brothers growing up and kind of making a name for the town even though there’s 130 people.”

The game has been important to Geekie, his brothers, and his family. His father, Craig, played in the WHL for the Brandon Wheat Kings and the Spokane Chiefs in the early 1990’s. His middle brother, Noah, played minor hockey around Manitoba, while the oldest, Morgan, is in his first season with the Seattle Kraken.

“[Hockey] has brought us together quite a lot,” Conor says. “You’re going to the rinks together, you’re playing games, shinny, whatever it is, and whatever it may be, but I think a lot of it has to do with just how we’ve taken it into our life. We’ve brought it in, we utilize those skills and utilize our time and it’s really brought us together.”

Morgan Geekie went viral last season with his passion for Pizza Hut, but Conor says that he prefers Qdoba over Pizza Hut. The two brothers are close and talk a lot over Xbox games.

“We do game a lot, it’s kind of a family thing,” Conor says. “Sometimes my dad gets on it too and it’s pretty fun just to be able to talk about whatever it is. Not trying to focus on hockey all the time or asking, ‘How’s the game?’ It’s just nice to kind of get a break from all that. Me and Morgan, we’re pretty close, I would say just our sense of humor, what we enjoy and stuff like that.”

Geekie was drafted second overall by the then Kootenay ICE during the 2019 WHL Draft in a year the ICE had the first two picks and took Matthew Savoie first overall.

At six-foot-four and 205 pounds, Geekie has caught the NHL’s eyes with 12 goals, 28 assists, and 40 points through the season’s first 38 games. With Geekie and Savoie, the ICE have started 29-6-2-1 and are first in the East Division and looking at a long playoff run.

Seeing his size on paper might lead you to think he’s a typical power forward, but that would be selling his game and skills short. He’s much more than a power forward.

“Obviously I’m a big forward but I would consider myself a playmaker,” Geekie says, scouting himself. “Players comparable would be a Leon Draisaitl or Aleksander Barkov-type player. I think I’ve got good IQ and good vision and I think my shot kind of goes overlooked sometimes, but definitely those are my three strongest points in my game. But yeah, I think I’m a playmaker.”

On this play he receives the puck in the high slot and somehow not only knows he has a teammate behind him but gets the puck to him in a perfect scoring area.

On this play he works the puck behind the net and fires a pass in front, through a number of players to find his teammate’s tape for an easy score.

The one knock on Geekie from some scouts is his skating ability and whether he’s fast enough. This clip where he wins a race down ice suggests that perhaps his size and long stride hide his speed.

Geekie at the NHL Draft

Without a doubt, Geekie is going to be a first-round pick, but the NHL Draft experts have him all over the board as to when.

NHL Central Scouting has him ranked as the fourth-best North American prospect – one spot below his teammate Savoie. Online draft experts vary in quality, but among the more respected lists, Geekie is ranked 10th by TSN, and eighth by Sportsnet.

Geekie is not stressing about where he’s ranked or where he’ll get drafted. Having an older brother who has gone through it, along with a teammate like Savoie helps. It also helps that he’s on a team that is in contention to not only win a WHL Championship but a Memorial Cup. For now, he’s focused on this team winning.

The Draft is scheduled to be held in Montreal this summer and Geekie will not have to wait too long to hear his name. He’s just not sure if he’ll be there in person, or in Strathclair with his family.

“It’d be a pleasure to go to Montreal and I think being with my family would also be a good, good decision, too,” he says. “So, I’m not really too sure on what I’m doing, but definitely excited.”