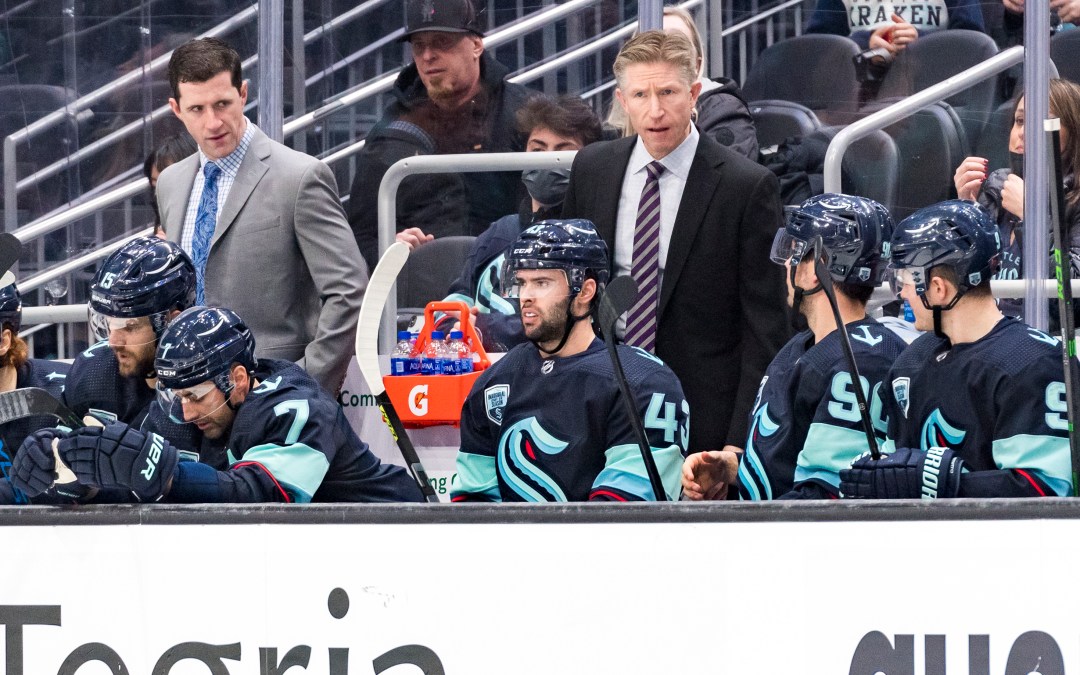 During a game broadcast, a commentator will often note that a home team has the advantage of the “last change.” Hockey rules provide that after a stoppage in play the away team must commit to its substitutions first, which allows the home team’s coach to dictate the on-ice player matchup by sending on its players second.

One could imagine the home coach considering numerous factors, including player matchups, player rest, the game situation (e.g., protecting a lead late or needing a goal late), the zone and side of the face-off, and the skill and handedness of the opposing team’s center. It seems the away coach is making similar evaluations and attempting to anticipate what the home coach will do.

This game within the game between the coaches is an easy stepping stone for a fan to think about hockey as a duel of coaches.

On the other hand, the fan might justifiably wonder just how much of a difference a coach’s “last change” tactics make when players are jumping over the boards every 45 seconds during the flow of play. Indeed, per NaturalStatTrick, 61 percent of all personnel changes are made on the fly.

A fan might go through the same push-and-pull thoughts about hockey coaching and tactics generally, particularly at the NHL level. I know I have. How important is a coach’s scheme, tactics, or philosophies when so much of the game appears spontaneous, improvisational, and skill-driven within the flow of play?

In this series I’ll study Dave Hakstol’s coaching system, philosophies, and tendencies, and describe where on the ice to look for Hakstol’s influence during Kraken games. Along the way, and particularly at the close of the series, I’ll attempt to situate Hakstol’s scheme and approach within the list of factors contributing to the Kraken’s on-ice results. Finally, I’ll offer thoughts on whether the staff’s current approach is right with this group of players.

Hakstol is a system-intensive coach

Before diving into substantive analysis in Part 2, here are a few general notes to orient us. As Karson Kuhlman recently noted on Episode 172 of the Sound Of Hockey Podcast, an NHL coach does not hand out a “playbook” like a football coach does. Instead, coaches teach and drill a system or scheme that equips the players with a default approach to each specified game situation (e.g., neutral zone defense).

Since NHL speed, physicality, and skill can defeat even the best and most meticulous plans, modern hockey systems are built to be flexible and adaptable. As I’ve observed it, Hakstol’s system is no exception.

That said, hockey is simply too dynamic to be anticipated and managed in its entirety by even the most malleable system. So, every coach and every system necessarily allows for improvisation and empowers players to react to what they see and attack weaknesses presented by the opponent. But just how much latitude the players are afforded to depart from the scheme–as matter of convenience or instinct–is a question of coaching philosophy that varies from coach to coach.

Observing the Kraken from the outside, it appears that Hakstol coaches close adherence to the team’s core schematic principles. It’s probably unfair at this juncture to say that Hakstol “discourages” improvisation, but the Kraken are highly disciplined in returning to the core system in neutral gameplay situations.

Looking back at Hakstol’s three and a half seasons in Philadelphia, it appears that the Flyers’ lack of off-schedule offensive creativity was a frequent source of complaint, even from Hakstol’s own general manager.

But there is reason to caution against reaching for the same conclusion a little more than halfway through one season in Seattle. The Kraken’s offensive play does appear overly determined and static at times, but I think it is fair to ask whether the Kraken have the necessary players to succeed in a system that relies on creativity. In other words, it is not yet clear whether Hakstol is inflexible in his coaching style or has determined that this particular team needs to rely heavily on the scheme because the offense would be worse off otherwise.

Skater roles are interchangeable and dictated by game situation

While forwards are often described by their position, and those labels have real meaning in terms of default positioning within the offense, NHL hockey moves far too quickly for the players to be expected to re-position themselves during the flow of play.

As is common throughout the NHL, in Hakstol’s Kraken scheme, a forward must be able to assume the nearest position assignment on the ice when transitioning from one facet of play to another. For example, the right winger may be caught on the left side of the ice when a turnover happens in the offensive zone. The player’s responsibility at that point isn’t necessarily to vacate the left side and return to the right, but rather to assume the closest coverage zone on the defensive forecheck in coordination with the player’s teammates.

Accordingly, in discussing the Kraken’s scheme concepts, the positions can be thought of as F1 (forward 1), F2, and F3, with F1 in puck possession or closest to the puck, and F3 farthest away.

The same general principles apply to some extent with defensemen. Circumstances of play dictate the positioning of D1 (defenseman 1) and D2, even if those players are typically situated on one side or the other. And, at times, defensemen and forwards must be prepared to exchange positions when the play demands.

If, for example, defenseman Jamie Oleksiak carried the puck deep on a rush by himself, he could hypothetically end up serving as the top-of-formation forward on a rush through the neutral zone. The scheme is dynamic because hockey is dynamic.

In the clip below, Ryan Donato, typically a winger, drives a line rush from the middle, while Alex Wennberg, a left-shot natural center, fills in on the right side.

Donato is not ignoring the system or improvising here; he is working within the scheme, driving a three-across line rush as F1 from the middle of the ice, the area that provides the most options for shot or pass. (The three-across line rush is a core offensive concept that will be addressed later in the series.)

The gray pencil lines represent a player movement. A faded Kraken logo (or Oilers logo) indicates a player’s former position before a movement.

With the scene set and some first principles established, in Part 2 I start to examine how Kraken coach Dave Hakstol implements his approach in specific game situations, focusing first on the neutral zone forecheck.