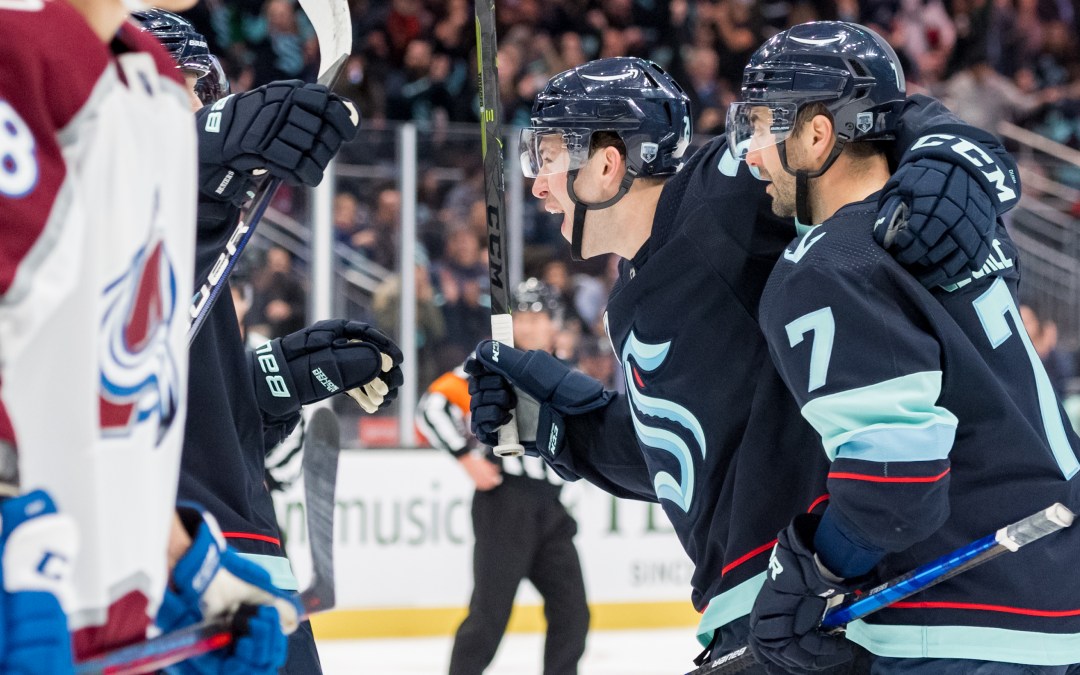 Walking into Climate Pledge Arena Wednesday, we found ourselves thinking back to some of the surprising home victories the Kraken pulled off earlier this season. Games that jumped to mind were the Dec. 3 win against Edmonton, when the Oilers came in cooking, and the Jan. 23 victory over the Florida Panthers, who now have 116 points in the standings.

The Kraken faced another team Wednesday that currently has 116 points, the Colorado Avalanche, and in impressive fashion held that high-octane group mostly at bay. Remember, this is the same team that came to Seattle in November and completely outclassed the Kraken with a 7-3 drubbing, then rallied in the third period to beat the Kraken again in January.

But Wednesday felt like it was going to be different from those other two meetings. The Kraken had played two good games in a row coming in, and seeing visions of surprising past victories felt like a real sign that something fun was going to happen.

And it did! Here are our Three Takeaways from an impressive 3-2 Kraken win over the Avalanche, giving Seattle its first three-game winning streak in franchise history.

As they did against the Senators on Monday, the Kraken came out flying on Wednesday and jumped out to an early 3-0 lead, taking advantage of a shaky Pavel Francouz. Kole Lind—scratched against Ottawa—got Seattle on the board first just 1:12 into the game with his second career NHL goal.

It came on a set play in which Will Borgen recognized that Lind had the jump on J.T. Compher and intentionally iced it. Lind beat out the icing call, picked up the rebound off the endwall, and made a nice move around Francouz.

Jordan Eberle followed that up with a snipe over Francouz’s shoulder at 5:23, and Yanni Gourde crashed the net on a Jared McCann shot that caromed off Gourde and in at 14:44.

Congratulations to Eberle for winning the NHL’s “Jagermeister Shot of the Night,” which we previously did not know was a thing.

Though the Avalanche would get back in it with tallies late in the first and third periods, the three opening-frame goals were all the support Philipp Grubauer needed to knock off his old team.

Grubauer, who stopped 27 of 29 shots on the night, gave all the credit to the players in front of him. “We were just in shooting lanes, boxing guys out,” Grubauer said. “[The Avalanche] have the skill to make the play that’s not there or the play that doesn’t seem obvious. So, really good job by everybody being in the lanes [with good] sticks.”

Eberle, who has been trotted out to talk to the media after some miserable losses this season, was in high spirits after the victory. “Any time you go up 3-0 early, it’s a bonus,” he said of the team’s hot start. “At the same time, against these guys, you understand that they have the firepower to be able to just easily come back from that, but I thought we did a good job for the most part limiting their chances and trying to help Grubi out as much as we could. When things broke down, he was there to make saves.”

Takeaway #2: Shut down Slow down their stars

In the aforementioned memorable Dec. 3 win against the Oilers, Seattle did a very good job of limiting the damage inflicted by Leon Draisaitl and Connor McDavid. Each superstar had a goal and an assist that night, but neither was able to really take over the game the way one might have expected.

The Kraken employed similar tactics on Wednesday, using a whole-team approach to defending against Nathan MacKinnon and Cale Makar. Again, both guys got on the scoresheet, as Makar scored a sick goal late in the first, and MacKinnon’s shot from distance led to Artturi Lehkonen’s goal in the closing minutes of the third.

But like in the game against Edmonton, the Kraken didn’t give Colorado’s biggest superstars too many opportunities. They were smart through the neutral zone, and when the Avs got set up in the offensive zone, Seattle did a tremendous job of keeping the puck on the perimeter.

“I guess we kept them for the most part off the scoreboard,” coach Dave Hakstol said of MacKinnon and Makar. “You just don’t shut those guys down. You’ve got to work hard, stay above [the puck], check out of the middle. … It starts with our first and second layers. They did a really good job. The forwards did a good job tonight, about as well as I would have hoped we could do in terms of deflecting and pushing some of that speed outside.”

That’s how you beat elite teams with elite players.

As much as we (quietly) want to see the Kraken rack up a few more organic losses to really solidify a top draft pick, it is very fun to see this team winning games. They’ve been much better since the Trade Deadline, and witnessing them get their third consecutive win for the first time this season was neat, especially against a team like the Avalanche.

“I think the last three games we’ve played teams that are pretty skilled up front,” Grubauer said. “We kind of changed our mentality a little bit. Especially tonight, I think we looked like a playoff team. We did all the right things from in our zone, from the forecheck, and through the neutral zone. We were supporting each other. [We were] on top of the puck, PK, special teams did a really good job.”

It’s been a grind and a process to get to this point, but the Kraken do appear to be playing some of their most cohesive hockey of the season right now. Eberle, who has been on his fair share of both winning and losing teams over the years, had some interesting things to say on the topic.

“We’re learning,” Eberle explained. “I’ve always found that winning and losing is such a fine line in this league. I mean, when you’re on the losing side of it, you tend to think the world is ending, but you don’t understand how close you are to actually being there. And then when you finally start to get leads, and then you blow them, you’re just getting that much closer.”

The narrative earlier in the season was often that the team was finding ways to lose games it could have won, but it seems to be flipping that script of late. “It’s not a mystery. It’s hard to win in this league,” Hakstol said. “You have a new group that’s a little bit unsure, that’s all it takes, and all of a sudden a small crack turns into a pretty large chasm. So right now there’s not a lot of cracks there. Guys are working hard, guys are in sync, guys are trusting each other.”

At this point, you may have heard our podcast interview with Vaughan Rody or read our Q&A with him, but he did officially ref his last game Wednesday, closing out his 22-year career as an NHL linesman. The Kraken gave him a nice little video tribute early in the game, and the players stuck around to shake his hand after.

We asked Hakstol about Rody after the game. “He’s very good at what he does,” Hakstol said. “But more importantly for me, it’s just the way he goes about it. He’s first class. He’s one of the guys that’s— there’s always a time in the game when you have an opportunity to say hello, and I got a ton of respect for him in the way he does his job.”