Stanley Cup Playoffs data: how scoring and penalties have changed this postseason 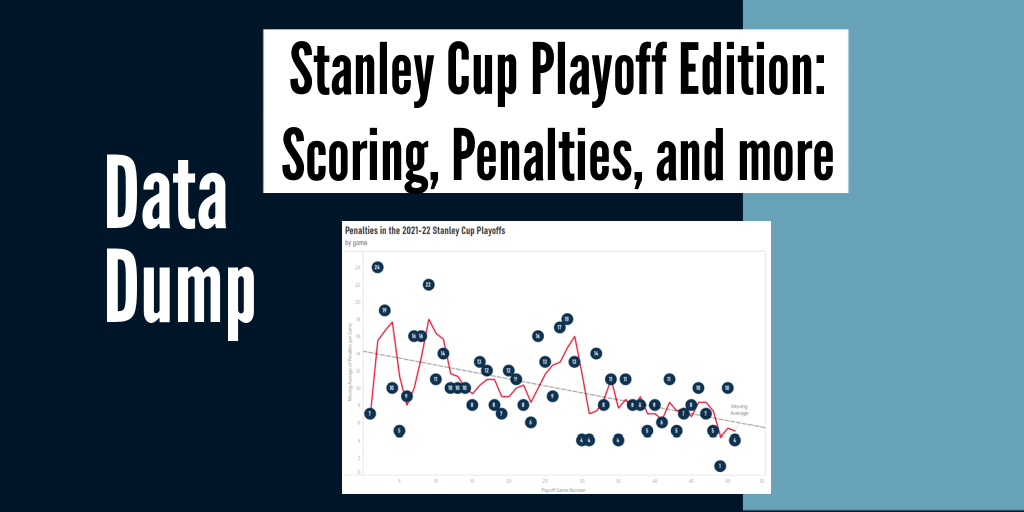 The weekend capped off an epic first round of the Stanley Cup Playoffs with five series going to seven games. Storylines and narratives through Round 1 were plentiful, with early complaints being thrown around about there being too many penalties and blowouts. Let’s dig into the numbers to see if those complaints were valid and to gain some insights and appreciation of what we just witnessed.

We already knew the regular season saw an increase in scoring, but we were not sure if that would expand to the playoffs. Spoiler, it did!

The first-round matchups saw the highest scoring in recent playoff history with an average of 6.4 goals per game this year compared to 5.7 last year. One possible theory for explaining this uptick is the increase in empty-net goals.

On average, empty-net goals are up, but this only accounts for .13 of the .7 goals-per-game increase we are seeing this year.

Early in this playoff season it seemed like there were quite a few blowouts with opening night bringing three games decided by four goals or more. Did this trend continue throughout the first round? Were games across the league less competitive than in previous postseasons?

That is quite the spike in goal differential this year compared to the last two years. Again, empty-net goals were a contributor, but that again does not explain the entire increase.

Yep, that graph checks out. The games felt like they got better as the round progressed, and the numbers confirm that sentiment.

Penalties per game in the Stanley Cup Playoffs

Now on to the other hot topic, penalties. There was certainly a lot of chatter about the rate of penalties called in the early part of the first round, and this chart proves it out.

Similar to the margin of victory trends, let’s look to see if the number of penalties called changed over the first round.

This chart shows a steady decline in penalties the deeper we got into Round 1. Most people will claim the referees stopped calling “soft penalties” as the round progressed, but it is entirely possible that the players adjusted to how the games were called early in the round. The root cause is probably a combination of both.

For comparison, here is how last year’s chart looked for the opening round.

Last year showed a decline from the beginning of the round to the end as well, but the number of penalties called was more consistent.

This last weekend the hockey gods gave us one of the best weekends we could hope for with five Game 7’s, two of which ended in overtime and four of which were one-goal games. Assuming no rooting interest, we could not have asked for much more. Let’s add some context.

Five Game 7’s is rare and was the most in an opening round since 1994. The hockey world seems to agree that the number of Game 7’s was great, but did we have as many overtime games this round?

Eight overtime games compared to 16 last year was quite the drop, but that was in line with the average from 2018 to 2020.

Do you have any thoughts on the playoffs so far? Anything from a data side you want us to look at? Drop a line in the comments or on twitter and we will see what we can do.