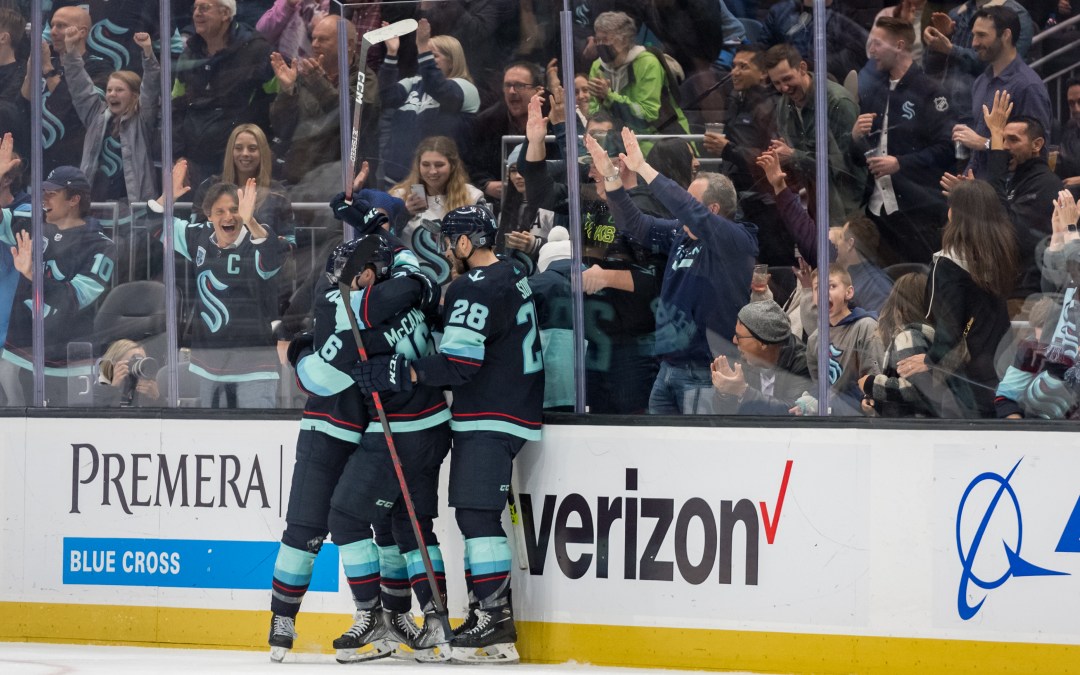 The Kraken players have cleaned out their lockers. Darren Brown is back to covering the Wild full time (not really). John Barr is watching the NHL playoffs for us. Andy Eide is finally getting some sleep (but not so much sleep that it prevents your favorite WHL correspondent from keeping tabs on the Thunderbirds).

In a year of firsts, we’re officially into the first “normal” offseason for the Seattle Kraken. What a ride it’s been. Thank you all for following along.

The offseason certainly gives the Sound Of Hockey team space to explore other topics in the hockey world, and we intend to do a little more of that. But I promise that this will not turn into a blog (entirely) about my six-year-old’s learn-to-skate lessons, which are going great, so thanks for asking. We have a litany of Kraken offseason topics that we just cannot wait to talk, write, and connect with you all about.

We thought we’d kick it off with a roundtable discussion on the state of the Kraken roster; which restricted free agents should come back and which marginal roster players might play a more significant role next season?

Later this week we’ll return with part II of this roundtable discussion, which will cover the work the Kraken could do in unrestricted free agency and on the trade market.

Which Kraken restricted free agents (RFA’s) will be coming back/qualified for next year?

Curtis Isacke: Generally speaking, a player is a restricted free agent if his previous contract has expired, but he is not yet 27 years old at the beginning of free agency and does not have seven accrued seasons of service time. An accrued season is one of at least 40 games at the NHL level for a skater or 30 games for a goaltender.

On June 25 the team must decide whether to extend qualifying offers to its restricted free agents. Of course, this decision should start with whether the team likes the player, but not all decisions are created equal. A few things to keep in mind:

Darren Brown: Thanks for setting all this up, Curtis. I personally don’t see much debate in qualifying all the RFA’s, except maybe Haydn Fleury, who has a bigger salary than the rest. AHL Coachella Valley needs to build out a team fast. So, keep all these guys in the system to create competition in training camp, then as some of them get pushed off the NHL roster, waive them and–assuming they clear waivers–let them help the Firebirds. I think Daniel Sprong showed enough offensive skill to keep him around, Ryan Donato and Karson Kuhlman proved that they belong in the Kraken lineup regularly, and Kole Lind and Morgan Geekie still have upside.

The reason I wonder about H. Fleury is because of what a rough season he had. He played just 36 games and was either health bombed or injured for the other 46.

Andy Eide: I agree, there is a strong case to be made for bringing everyone back. Donato had a career year, played up and down the lineup, and so far loves Seattle. He’s the biggest no-doubter of the group and while its very likely all of these guys get their qualifying offer, there are a couple questions.

Haydn Fleury probably will get an offer, but he had a tough season and was healthy scratched most nights. He had some tough games where he didn’t manage the puck well, and when he finally got a chance to play regularly at the end of the year, he immediately was injured. Rough timing, but he’s a guy who makes the most of all the RFA’s and could appear to be expendable on a crowded blue line.

When Seattle acquired Sprong at the NHL Trade Deadline it felt like he was a veteran body for the Kraken to finish out the season with. He played well, though, and showed that he did indeed have a heavy shot and scored six goals in 16 games. His underlying numbers are decent, but offensively he’s a bit one dimensional. He didn’t have any assists with Seattle and hasn’t been much of a playmaker throughout his career (46 career goals to 24 assists). Not a deal breaker by any stretch but one tiny flag that may get the Kraken thinking. All that being said, it would be a bit surprising if he didn’t get an offer.

John Barr: Of the forward group, Lind, Donato, Geekie, and Kuhlman seem like locks to be qualified and can probably be penciled onto the Kraken roster next year. I think Sprong is the wild card here. He had some moments down the stretch and has some goal scoring capabilities that the team lacked. He does have arbitration rights and can probably get more money than simply a qualifying offer, so the Kraken may pass on qualifying him. I can see Alex True and Carsen Twarynski getting qualified with the plan to start them with the AHL team in Coachella Valley.

On defense, the Kraken will likely qualify Dennis Cholowski and Cale Fleury. These are low-risk decisions for the Kraken since their contracts will be close to the league minimum. Haydn Fleury is the tricky one. He does belong in the NHL but could never get his footing this year and might benefit from a change of scenery.

Josh Horton: I agree with the rest of the Sound Of Hockey triumvirate in that the majority of the Kraken’s pending restricted free agents will re-sign with the team. The organization still needs depth, and it would behoove Ron Francis and company to see what they have in players like Sprong, Geekie, and Lind. Donato proved to be a useful player who can contribute up and down the lineup.

The trickiest one is Haydn Fleury, as was mentioned above. My gut feeling is he’ll be tendered a contract as well. Unless Ryker Evans is ready to contribute at the NHL level right away — or the Kraken make a big splash acquisition to the blue line this offseason — Fleury should be given a chance to prove to Dave Hakstol he’s worthy of staying on the ice and out of the press box as a healthy scratch.

Curtis: With the elder Fleury, I envision a situation where he declines the qualifying offer, and after invoking arbitration, ultimately gets awarded something like $1.75 million. This is well above the salary threshold that could be buried in the AHL. Perhaps the Kraken deem this sum too expensive for a player the coaching staff has treated as the seventh or sometimes eighth defenseman this year. Personally, I like Fleury as a fourth or fifth defenseman, but I don’t think Dave Hakstol agrees. I’ll predict a non-tender here.

I’ll also recklessly predict the team negotiates two-year contracts with Cale Fleury and Ryan Donato. I could imagine the team non-tendering Daniel Sprong, but I wouldn’t really see the logic in that from an asset management perspective, since there is little downside to tendering him.

Far too much consensus on that first offseason question. Let’s see if we can do better…

Setting aside Matty Beniers, is there another Kraken reserve list player that spent a majority of the 2021-22 season outside Seattle that you expect to be a 2022-23 Kraken regular or at least make significant contributions?

Andy: Of the forwards who played in the AHL this year, Kole Lind seems like he has the best shot of making the NHL roster in 2022-23. Lind was recalled late in the year, performed well, and this could be the year he becomes an NHL regular.

Defensively, Ryker Evans will get a legitimate shot at making the team in training camp. He’s inexperienced but is an older draft prospect, turning 21 this year. Evans was noticeable at last fall’s training camp and very well might have ended up in the AHL if the Kraken weren’t splitting their affiliation.

He played with poise, confidence, and has the offensive skill Seattle’s defense could use. There aren’t a lot of obvious open slots on defense, and that may end up costing him at the outset. While he may start in the AHL, it’s reasonable to expect he sees NHL games this season.

Additionally, while not a player already in the system, the team’s upcoming first-round draft pick may end up in the NHL. That is harder to project, unless they end up with the top pick and select Shane Wright, but Francis said he feels there is more than one NHL-ready prospect at the top of the draft.

Darren: I’ll join Andy with what I believe is the most obvious choice here in Evans. Francis said he will get every opportunity to make the team out of camp, and I believe that was genuine. Evans turned a lot of heads in Seattle’s first training camp, then went on to have an outstanding almost-point-per-game season with the WHL’s Regina Pats.

Curtis: I’m going a bit off the board here and will call out recent signee Peetro Seppälä as someone to watch. He’s a 21-year-old defenseman who tallied 8 goals and 21 assists, and was a plus-18, in 57 games for KooKoo in Finland’s Liiga.

By one analytical measure, Liiga is the sixth strongest professional league in the world, ranking above the AHL in terms of competition level. Accordingly, his back-of-the-napkin NHL point equivalency projections compare similarly to Dennis Cholowski’s NHL projections – despite being two-and-a-half years younger than Cholowski – and favorably to Cale Fleury’s projections. Seppälä’s offensive upside makes him an intriguing bottom-of-the-depth-chart complement to the current group.

Unless Seppälä simply dominates training camp, the young Finn will likely begin the year in Coachella Valley because he is waiver-exempt. But Seppälä has demonstrated a skill level that should draw him into the mix for blue line minutes if he can translate his game state-side.

John: Kole Lind seems primed to take a step. He had a good year with the Charlotte Checkers netting 17 goals and 18 assists over 46 games with the AHL club. When he was called up for the Kraken he seemed to get more and more comfortable playing at the NHL level as the season progressed.

Josh: Dennis Cholowski intrigues me quite a bit. The 24-year-old has 18 points in 31 games for AHL Charlotte this season, but has struggled to stick in the NHL with Detroit, Seattle, and Washington — the Capitals claimed him after Seattle initially waived him in October. People also forget that he has 115 games of NHL experience.

I don’t have grand expectations for Cholowski, but the offensive upside is something to monitor.