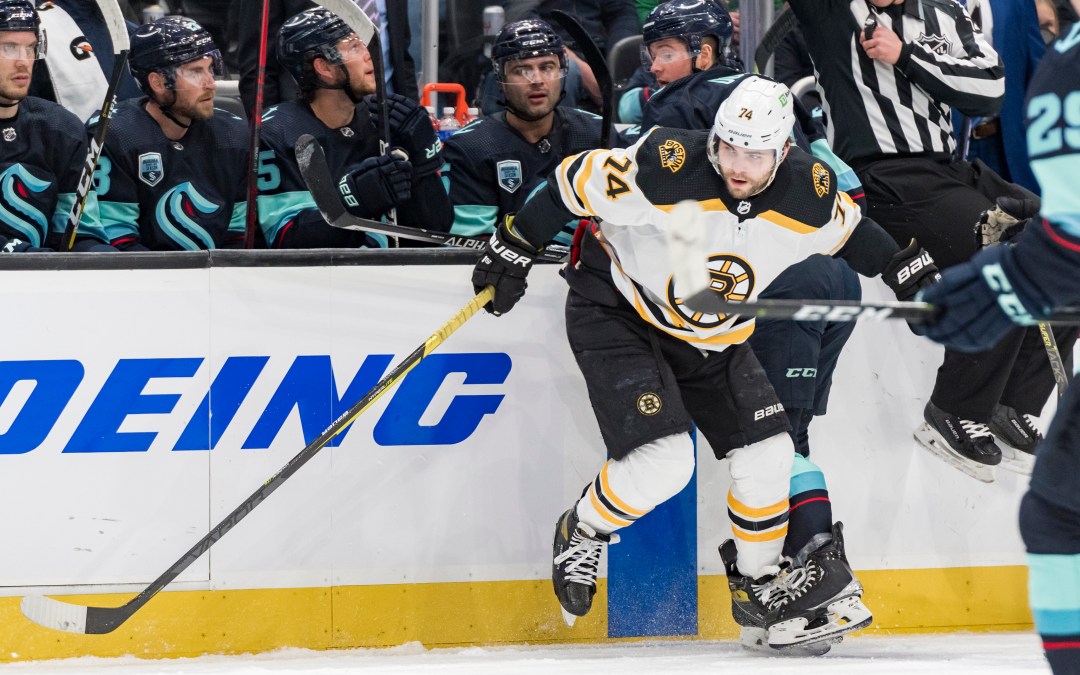 In part I our Kraken roundtable discussion, we considered which restricted free agents will be back next season, as well as which players within the organization may make strides in 2022-23. In this second part, we make some wild predictions about who the Kraken might trade for and who they might target in free agency.

Do you anticipate the Kraken making any major trades in the offseason?

Darren Brown: Well, I wrote recently that I thought there was a chance Chris Driedger could be traded, due to Joey Daccord’s waiver exemption running out. GM Ron Francis more or less dispelled that during his end-of-season presser, though, implying that the team would bring all three of its goalies to training camp and risk putting Daccord on waivers if needed. So, a Driedger trade is probably out.

Since – as Curtis mentioned in part I – I’m back to covering the Wild full time, I might as well throw it out that Minnesota is going to have to trade an important player or two this offseason. Kevin Fiala is an RFA and the Wild do not have enough space to re-sign him, so they will have to trade either him or somebody like Matt Dumba. I would gladly take either of those two players on the Kraken roster, and Seattle has plenty of cap space and a gazillion draft picks to offer up. The Wild can’t take on salary, so draft picks may be the return they’re seeking in a deal for either player.

John Barr: It does not feel to me like the Kraken have enough bargaining chips in their existing talent pool to make any major trades this offseason. They might make some trades, but I doubt any of them will be “major.”

Andy Eide: The most likely time for a Kraken trade may be at the NHL Draft. Francis has made no secret he’d like to use the stockpile of picks he’s accumulated as trade assets. The problem is outside of that, he doesn’t have a great deal of trade bait when it comes to players. One thing he has is cap space, and if he can find a team looking to dump a player to free salary then maybe a trade is doable. You just wonder if second-round picks are attractive enough.

Unless he shocks us and trades a roster player, don’t expect any blockbusters coming.

Seattle might be able to use those picks to move up in July’s draft and could use them to jump into the mid-to-late first round if the right partner is there.

Curtis Isacke: I do expect the Kraken to target an offseason trade with a cap-strapped team for a top-nine capable forward or a top-four capable defender by leveraging their cap space and a second round pick or two. I’ll admit that the player I have thought the most about in this regard is skilled Maple Leafs winger William Nylander, but that’s quite a long shot.

I want to take a closer look at the cap situations of several teams, but a more realistic list of potential trade block players include guys like Jonathan Marchessault of the Golden Knights, Alex Killorn of the Lightning, or Jake Debrusk or Mike Reilly of the Bruins. None of those specific players stand out to me as obvious, must-adds at their current AAV. But sitting here today, I do expect a “major” trade in lieu of a true top-of-the-market free agent signing. More on that below.

Josh Horton: Curtis mentioned Jake Debrusk, and that makes a lot of sense to me. Debrusk, 25, requested a trade but is still relatively young and has been productive in Boston. Boston has held its position and hasn’t wavered in its asking price for Debrusk, but we’ll see if that changes at the NHL Draft and beyond.

Generally, I’m curious to see how active Francis is in the trade market. The Kraken are in a unique situation by having a limited prospect pool and a wealth of draft picks in the next two seasons to fill it. But if a player is available at the right price, the Kraken possess the ammo to facilitate some significant deals with its cavalcade of second-round picks in 2022 and 2023.

Generally, I don’t anticipate the Kraken to be too involved with the bigger fish who are rumored to be traded this offseason, like Patrick Kane, Mark Scheifele, and JT Miller.

What do you think the free agent strategy will be for Ron Francis and company? Any specific free agents you think could be a good fit in Seattle?

John: I said it on the podcast last week, but I anticipate the Kraken pursuing and hopefully landing one of the big free agents this offseason. Specifically Filip Forsberg, Johnny Gaudreau, or John Klingberg are the big three in this category. Even if they add one of those big-ticket free agents, they will still need to land some more depth scoring to really address the deficiency they have in that area. Bryan Rust, Nino Niederreiter, or Ondrej Palat could all fit that mold.

Darren: Though John didn’t mention this above, he’s recently gotten me to come around to the idea that it’s too early to make huge splashes for star players. For the long-term health of the organization, it’s probably better to continue to strengthen the core and wait until that group is competitive. Once that’s done, then you try to land a big fish or two.

However, there’s clearly some urgency for the Kraken to jumpstart their playoff chances, so with that, I’m fully on board the Filip Forsberg train.

Curtis: I’ve gone back and forth in my thinking on how aggressive the team should be in free agency. Part of me says: embrace the “build” for one more season and put yourself in position to pick one more time near the top of the stacked 2023 entry draft while developing players like Matty Beniers, Ryker Evans, and the team’s 2022 first-round pick.

But I’ve settled on this: the team is just too good to be so bad again next year. Even setting aside a rebound from Philipp Grubauer, the talent on this current team projects to something closer to a .500 team than a repeat cellar dweller. So, on the one hand, the benefits of poor performance (a top 2023 draft pick) are unlikely to be there. And, on the other hand, this is precisely the type of team that could benefit the most from an infusion of talent, since added talent could be the tipping point into playoff contention.

The question is: How do you add? Realistically, I don’t expect the team to sign the true top-of-the-class players. Johnny Gaudreau would be a good fit, but I don’t expect him to choose Seattle–and his term and AAV would be problematic long term. Same for Filip Forsberg. Those two aside, I have my reservations about the value other perceived top-of-market players like Nazem Kadri and John Klingberg would deliver.

With all that said, I do expect the team to target two top-nine forwards, probably with an emphasis on players who could slot on the right side since the depth chart behind Jordan Eberle is relatively sparse. I’ll predict one of these players arrives via trade, as mentioned above. The other will arrive via free agency.

I like John’s prediction of Bryan Rust. His style is a strong fit for the way the Kraken play offense. I also like his current Penguins teammate Evan Rodrigues as a fit. Andre Burakovsky has played more on the left side, but if he’s attainable on a reasonable AAV and term – perhaps a bit north of Jared McCann’s contract – he’d be number one on my offseason big board. I also expect the team to add a bottom-four right-shot defenseman, perhaps to replace Haydn Fleury’s current position on the roster.

Andy: Going after top-end free agents is entertaining and has a certain fantasy sports aspect that makes it fun for fans to be all in on throwing money at players. But there’s a reason fans and media aren’t general managers, and Francis has to thread the needle here. He has money to spend, but loading up on free agency is a double-edged sword. Big-time free agents get rewarded for past performances and will want term to go with it. The trick is trying to determine if the short-term pump they bring will be worth carrying hard-to-move, high-end contracts in the future.

Francis has said publicly on more than one occasion that he plans on being ‘aggressive’ in this summer’s free agency. Does that mean he goes after the Gaudreaus and Forsbergs out there? Don’t be surprised if Francis ends up landing one of those top targets and maybe a secondary player or two to fill in.

The Kraken roster is in need of offensive skill and finishers. The fastest way to add that is through free agency and Francis may be able to add those top guys while relying on the continuing development of Matty Beniers, his 2022 pick, and the Ryker Evans’ of the world to step up as the roster ages long term.

Like the ancient knight suggests at the end of the horrible Indiana Jones and the Last Crusade**, ‘choose wisely’.

**Editor’s note: Andy is incorrect. Indiana Jones and the Last Crusade is fantastic.

Josh: John Klingberg is my flag plant for the splashy free agent that is most likely to land in Seattle. The Kraken are in need of a right-shot defenseman and Klingberg, 30, would bring that, plus some offensive creativity to a blue line that could use it. Klingberg was productive this past season with 47 points and 8.47 individual expected goals (iXG), his highest in the past four seasons.

However, like any big-ticket free agent, Klingberg will expect a long-term deal, and the Kraken will be saddled with an albatross contract if his play swiftly declines into his mid-to-late 30’s.

It’s a risk the Kraken will have to assess this offseason with free agency. If Francis and company believe the team underperformed to expectations last year, and perhaps could contend next season if goaltending turns around, there’s no reason why Seattle shouldn’t swing for the top-flight free agents like Klingberg, Gaudreau, or Forsberg.

Seattle should be an attractive free agent destination with its close proximity to the Canadian border — especially for British Columbia natives wanting to play near home, and with Washington State not having state income tax. Attracting and wooing free agents shouldn’t be an issue.

But with the 2023 NHL Draft class projecting to be an all-time great crop of players, is a splashy offseason worth it? My gut feeling is no and that Seattle needs to grow with its current young core of players before layering in superstar contracts.

How aggressive Seattle is with free agency this offseason should indicate how the organization feels about the current state of the franchise.