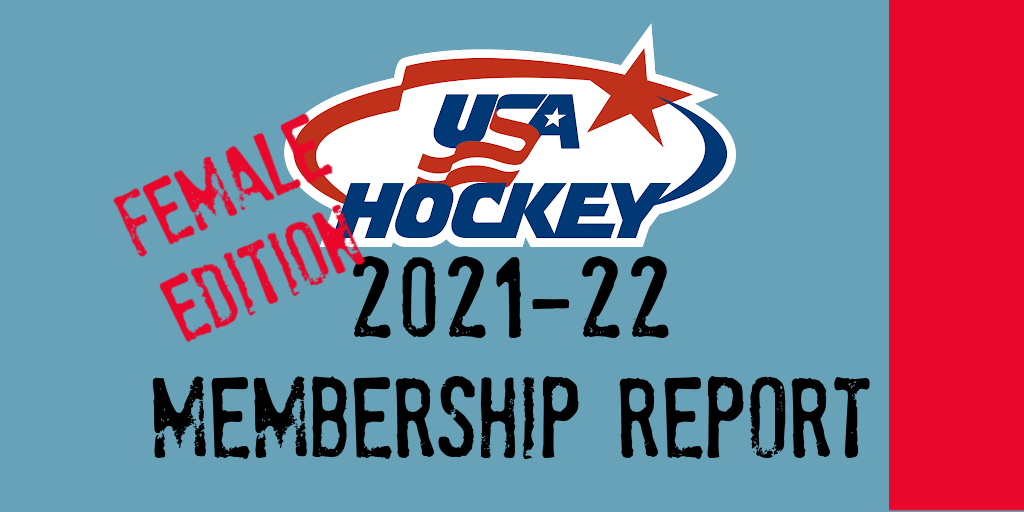 Last week, we shared analysis on the 20 percent increase in USA Hockey player memberships over last season. This week, we are looking into the numbers reported on female memberships to evaluate the growth (or decline) of female participation in USA Hockey.

Here is how the female participation numbers have looked since 2012-13.

Like the trends we reported last week, female memberships are also seeing a huge recovery with an increase of 25 percent season over season. One of the storylines for the “all players” numbers reported by USA Hockey was that memberships are up significantly but have yet to return to the pre-pandemic numbers of 2019-20 season. This is not the case with female memberships, as they are up more than 5 percent compared to the 2019-20 season, an all-time high.

When we break it down by state, we see some relatively consistent numbers compared to the overall numbers we analyzed last week. Massachusetts, California, New York, Michigan, and Minnesota added the most memberships since last season. They were all some of the most severely hit during the pandemic-impacted season in 2021-22.

In terms of percentages, the top states for growth among female participants are consistent with the total membership reported. Here is a look at the top 10 states by percentage change.

This consistency makes sense, since if a state is recovering, it would be likely that all people are returning to hockey at the same rate.

In Washington State, female hockey memberships are up 87 percent from last year, and what might be more impressive is that memberships are up 20 percent compared to 2019-20. This is more than just a recovery from the pandemic-impacted season of 2020-21.

These are really encouraging trends for female hockey players in Washington State. The more players there are, the more opportunities this will provide for girls to play at an older age, as participation has tended to wane in the older age groups. If you can grow the game at a young age, there will be more players at the older age groups, even if the retention rate stays the same. Here is a breakdown of the players by age group and percentage growth of each category.

Again, the reasons for the growth in girls and women’s hockey is the same as it was for all members: 1) return from pandemic-impacted season. 2) Kraken emphasis on the Adult Learn to Play, NHL Learn to Play and Sealeague programming at Kraken Community Iceplex.

The growth in girls and women’s hockey in the area is encouraging, as even more growth is expected in the coming years. Next year the Seattle Kraken will be adding girls-only teams in the 8U, 10U, and 12U age groups, and the Kraken will inspire plenty of youth and adults to give hockey a try.