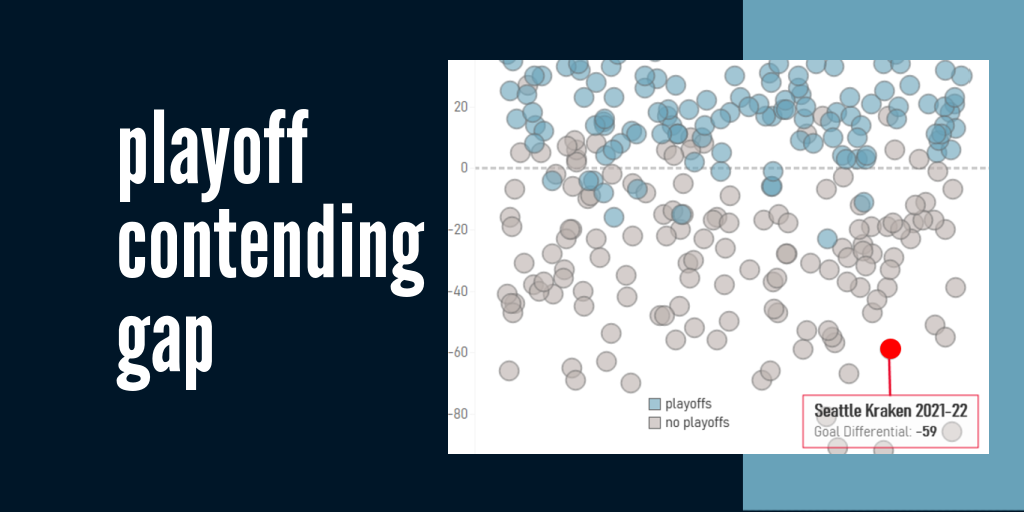 General manager Ron Francis has made it clear that the goal of the Seattle Kraken is to make the playoffs in 2022-23, which might seem like a stretch goal coming from a team that just finished fourth from last place in the NHL standings. The team will need to be aggressive this offseason to even be taken seriously in its quest to contend.

To explore what it will take to get into contention next year, we will be putting together a three-part series on how that could happen. The scenarios presented will be full of assumptions with imperfect data and incomplete analysis, but at its core, this will be a thought exercise that will help evaluate the offseason moves needed to make the Kraken a potential playoff team.

The NHL’s point system, with one point awarded for overtime and shootout losses, makes things a little complicated, but effectively, teams must win more than they lose to make the playoffs. To do that, they need to score more goals than their opponents. Therefore, we will be using goals as our primary metric here, rather than standings points.

One challenge to consider when using goals, in NHL team statistics, a shootout win or loss will add a goal for or against respectively. Along with empty-net goals, these would overstate or understate a team’s goals with respect to this analysis, so keep that in mind. We were able to adjust the totals to remove empty-net and shootout goals, but those bonus goals awarded for shootout wins will remain.

The picture is clearer if we just focus on the teams that qualify for the playoffs and those that do not, based on goal differential “buckets.”

Based on the data, a negative five goal differential is where teams have roughly a 50/50 chance of making the playoffs.

During the 2021-22 season the Kraken had a negative 59 adjusted goal differential. Assuming the negative five goal differential is the target for putting themselves in a solid position to qualify for the 2023 Stanley Cup Playoffs, then they will need to eliminate a 54-goal gap. There are many ways this can be accomplished, but for this exercise we are going to keep it simple and focus on goaltending and goal scoring.

Goaltending must be better

According to Evolving-Hockey.com, the Kraken goaltending had a “Goals Saved Above Expected” (GSAx) of negative 41.3.

The math behind these numbers can be a bit complicated, but let’s put it in simple terms: If the Kraken received just average goaltending from their goaltenders, they would have allowed 41 fewer goals in the 2021-22 season. Expecting exeptional goaltending next season might be wishful thinking, but the goaltending tandem of Philipp Grubauer and Chris Driedger gave us reason for optimism by both playing their best hockey of the season down the stretch.

Expecting a major improvement to goaltending took a hit when the team announced that Driedger underwent surgery for a torn ACL with an expected timeline to return of seven-to-nine months. For now, we are going to assume a reasonable 10 GSAx improvement to next year’s goaltending.

This gives you the framework of the analysis that we intend to do here. In the next installment in the series, we will focus on goal scoring projections for the current Seattle Kraken players and where the team might be able to add personnel to address gaps in becoming a contender.