The Kraken have 12 picks in the NHL Draft – how have past teams with big draft classes performed? 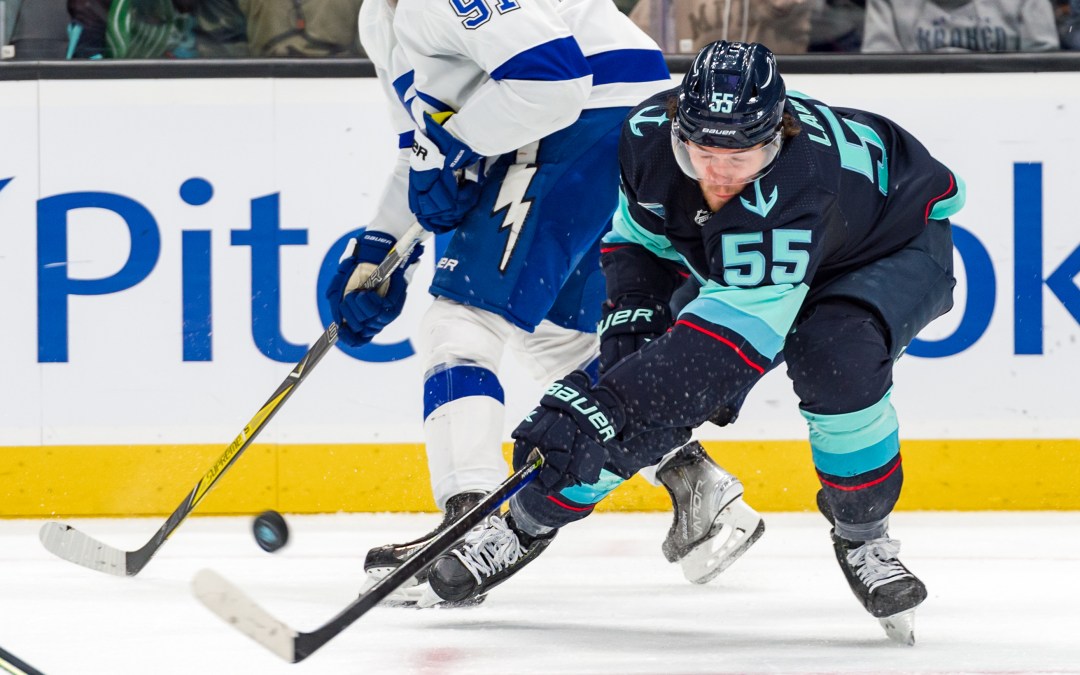 The Seattle Kraken’s NHL Draft cupboard is stacked for the next two years.

But will the windfall of draft picks make a considerable difference for general manager Ron Francis and company?

The Kraken, thanks to a busy trade deadline firesale, have 25 total draft picks in the next two NHL Drafts — 12 in 2022 and 13 in 2023. Most notably, Seattle boasts seven total second-rounders in those two drafts and the No. 4 overall pick in the upcoming July draft.

There’s no guarantee all of those picks will be used by the Kraken — Francis has said he’s open to trading up or down in the draft or packaging picks for roster-ready players — but I set out to see how past NHL teams used gluts of draft picks to their benefit, or lack thereof.

The focus below centers around 1) teams with back-to-back draft classes with double-digit picks and 2) teams with three or more second-round picks. The 2019, 2020, and 2021 drafts were not included because it’s too early to make grand proclamations about how those teams performed.

How rare is the Kraken’s stock of draft picks?

Since 2010, there have been six teams with 12 or more draft picks in the NHL Entry Draft — four of which have occurred over the last three years.

What can the Kraken expect from their draft picks?

Obviously, all draft picks aren’t created equal. The drop off in expected value from the No. 4 overall pick to the second round is considerable.

As outlined below, there are quite a few drafts that are completely unfruitful in the later rounds. While it’s certainly possible to hit on later picks, Kraken fans shouldn’t expect a future star in the third round or later.

The second round, which constitutes 28 percent of the Kraken’s draft picks over the next two years, also provides no guarantees. As you’ll see in the breakdowns below, it’s not a given that the Kraken will find bona fide NHL players with all their second-rounders.

But they are available, in the second round or later. It’s up to the scouting staff to unearth those draft gems and the general manager to pull the trigger.

The Blackhawks had 10 draft picks — including four second-rounders — in 2010 and 11 in 2011, a close comparison to the Kraken’s upcoming drafts.

Unfortunately for Chicago, and perhaps the Kraken, the results were a bit mixed, but overall the Blackhawks nabbed quite a few NHLers.

Chicago landed Kevin Hayes No. 24 overall, a pick that was sent to Chicago from the Atlanta Thrashers (R.I.P.) in the Dustin Byfuglien trade. The Blackhawks then traded out of their own first-round pick (30th overall) and landed two more second-rounders, giving them four total, including another pick acquired in the aforementioned Byfuglien trade.

The Blackhawks whiffed on the highest selection of that quartet, Swedish forward Ludvig Rensfeldt, who never cracked the NHL. Two of those remaining seconds — Justin Holl and Stephen Johns — became late-blossoming depth defensemen for Toronto and Dallas, respectively. The fourth became Kent Simpson, a former Everett Silvertips netminder, who only appeared in one NHL game.

In the third round, the then-defending Stanley Cup Champions snagged longtime depth forward Joakim Nordstrom, but after that, there wasn’t much else; none of the Blackhawks’ five remaining selections in 2010 cracked the NHL.

Chicago’s first pick at No. 18, center Mark McNeill, flopped, but Chicago snagged two-way dynamo Phillip Danault at No. 24 overall — acquired via Washington for Troy Brouwer — Brandon Saad at No. 43, and depth forward Andrew Shaw in the fifth round.

The unique aspect of Chicago’s 2011 haul is that aside from Danault, the best picks played the majority of their best hockey in Chicago.

Also noteworthy context: Chicago pulled off these massive draft hauls in the middle of a dynasty. Anything obtained from these drafts was just gravy on top of a loaded roster, and in that gravy were some darn good players.

Despite seemingly swinging and missing on two of their three second-rounders in Chad Kuys and Artur Kayumov in 2016, the Blackhawks’ one connection was an absolute home run.

Alex DeBrincat was taken by Chicago at No. 39 overall. The undersized American winger is already one of the league’s most dangerous goal scorers, with 160 tallies in 368 NHL games.

The Oilers, in the wake of selecting Taylor Hall No. 1 overall, possessed three second-rounders and nabbed two NHL depth players — forward Tyler Pitlick and Martin Marincin. Edmonton took Curtis Hamilton at No. 48, who never panned out.

It’s not an awe-inspiring return, but landing two NHL players is nothing to sneeze at — even though Nikita Kucherov was available until No. 58 overall.

The Panthers held 23 total picks in subsequent years, with 13 in 2010, including three first-rounders and three second-rounders, and 10 in 2011.

In the first round in 2010, Florida snagged Erik Gudbranson, Nick Bjugstad, and Quinton Howden at No. 3, No. 19, and No. 25 overall, respectively. Gudbranson and Bjugstad are both lineup regulars in the NHL while Howden failed to stick.

The Panthers had the No. 33, No. 36, and No. 50 overall picks and didn’t get much from it in John McFarland, Alex Petrovic, and Connor Brickley. McFarland only played three NHL games and Brickley played just 81. Petrovic has been out of the league for a few years, but he played 263 games in a depth defenseman role.

Florida uncovered some late-round gems by selecting current Kraken forward Joonas Donskoi in the fourth round and current Oilers top-six forward Zach Hyman in the fifth.

The rest of the Panthers’ five remaining picks in 2010 never cracked the league.

In 2011, Florida landed star forward Jonathan Huberdeau at No. 3 overall and two-way stalwart Vincent Trocheck in the third. Early second-rounder Rocco Grimaldi and third-rounder Logan Shaw have each played over 200 NHL games. The rest of their draft picks either just had a cup of coffee or never made it to the NHL.

It seems like four teams held a monopoly on the second round in 2010, huh?

The Wild landed a diamond in the rough in Jason Zucker at 59th overall, a decent role player in Johan Larsson — even if his most productive years were spent in Buffalo — at 56th overall, and a bust in right winger Brett Bulmer at 39th overall.

The Sabres held three second-rounders in 2013, the highlight being future Stanley Cup Champion J.T. Compher — included in the trade that sent Ryan O’Reilly to Buffalo — at 35th overall. Connor Hurley, taken at 38th overall, was never signed, and Justin Bailey has played sparingly for Buffalo and Vancouver.

In their second consecutive season with three second-round picks, the Sabres had far less to show from this draft than the year prior.

Brendan Lemieux, taken at No. 31 overall, has been an NHL regular for several teams but never played for the Sabres — he was traded to Winnipeg in a deal that sent Evander Kane to Buffalo.

Forwards Eric Cornel and Vaclav Karabacek never made it to the NHL, but they have gotten surprise value out of seventh-rounder Victor Olofsson, who has two recent 20-goal seasons.

The Canadiens had mixed results with their trio of second-rounders in 2013. The first of the three was used on Jacob de la Rose, who was a depth forward for Montreal, Detroit, and St. Louis before returning to play professionally in his home country of Sweden. The second was spent on goaltender Zachary Fucale, whose career consists of just four games with Washington this past year.

The third, forward Artturi Lehkonen, was the best of the three. The Finnish left winger played an integral role on the 2020-21 Canadiens team that made a run to the Stanley Cup Final and the Avalanche team that won the most recent Stanley Cup.

Although this draft was infamous in Beantown for the Bruins passing up former Seattle Thunderbirds superstar Mathew Barzal with back-to-back-to-back first-round picks, the Bruins found some great value in the second round.

The first of their three draft picks was spent on defensive stalwart and former Tri-City American, Brandon Carlo, who remains a fixture in the Bruins’ lineup.

Center Jakob Karlsson was the second pick, who played sparingly for Boston before returning to his home country of Sweden in 2019.

The third pick became former Kraken Jeremy Lauzon, who recently signed a contract extension with Nashville after being traded to the Predators from Seattle at the trade deadline.

The Flyers’ most notable second-rounder from their 2016 crop was Everett Silvertips legend Carter Hart, who has had a bit of a setback in his NHL career ever since bursting onto the scene in 2018. The jury is still out on Hart, who is just 23.

The Flyers’ two other picks, Pascal Laberge and Wade Allison, haven’t panned out. Allison remains in the organization while Laberge has moved on.

All three of the Lightning’s picks in 2016 have played more than 50 games, but none of the three have played over 100 games.

Libor Hajek, taken at No. 37 overall, was traded to the Rangers in a 2018 deadline deal that brought Ryan McDonagh and J.T. Miller to Tampa. The other two picks, Taylor Raddysh and Boris Katchouk, were fillers in the trade that sent Brandon Hagel to Tampa in a recent deal with Chicago.

The Golden Knights’ inaugural draft class included 12 picks and provided a nice boost to the depth of the organization.

With three first-rounders, Vegas took Cody Glass at No. 6 overall, Nick Suzuki at No. 13 overall, and Erik Brannstrom at No. 15 overall.

Glass was traded to Nashville in a one-for-one trade for another former high-draft pick in Nolan Patrick.

Suzuki is a burgeoning star for the Montreal Canadiens. The center was sent to Montreal in the deal that brought Max Pacioretty to Vegas.

Similar to the other two, Brannstrom was a key part in a high-profile trade as the centerpiece of the Mark Stone deal with Ottawa.

Vegas landed a useful player in Nicolas Hague in the second round. The defenseman has provided depth to the Golden Knights’ blue line in each of the last three seasons.

Third-round picks Jake Leschyshyn and Jonas Rondbjerg both cracked the Vegas lineup this year as forwards.

The Golden Knights’ remaining six picks have yet to break through to the NHL aside from seventh-round pick Ben Jones.

With 21 picks over two years, the Red Wings had some success in the first couple rounds, but that’s about it.

In 2017, the Red Wings took Michael Rasmussen No. 9 overall. The 6-foot-6 center has been a regular in Detroit’s lineup, as has Filip Zadina, who the Red Wings selected at No. 6 overall in 2018.

Other than blueliner Alec Regula, who was taken in the third round in 2018, the Red Wings’ remaining 16 draft picks haven’t made it to the NHL yet.