Just how much NHL talent did the Seattle Kraken find in their 2022 draft class? 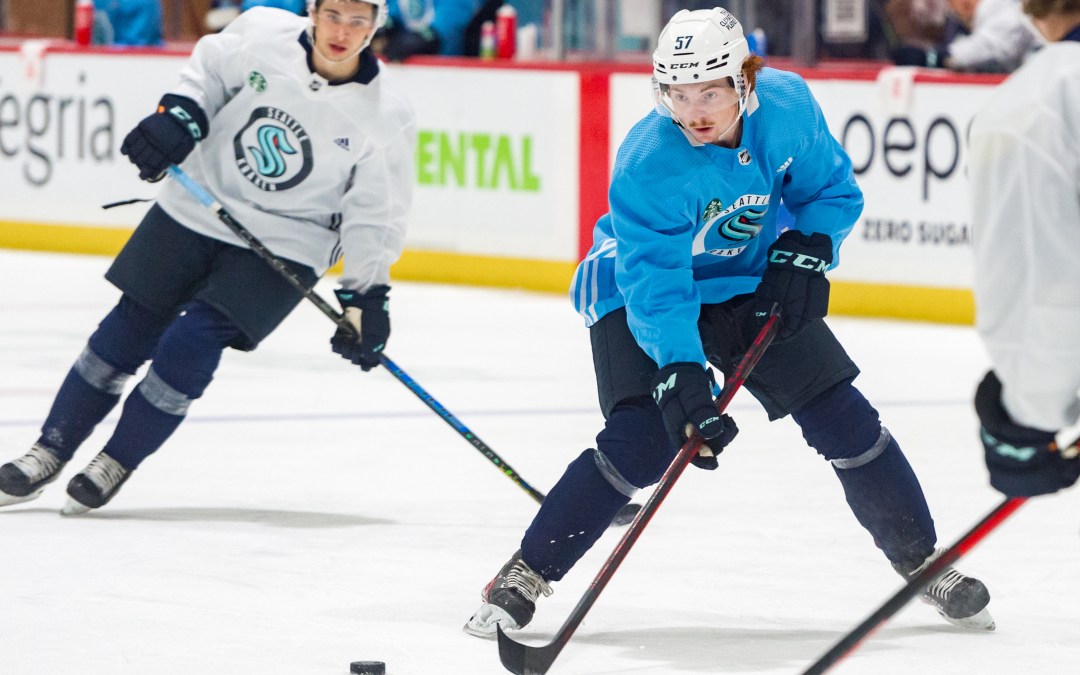 Along with Kraken fans, we here at Sound Of Hockey continue to wait on any late-breaking news regarding NHL-level roster moves. We will cover it here whenever any additional transactions are announced.

In the meantime, however, we wanted to revisit Seattle’s crucial 2022 NHL Draft one more time. Last week I wrote about the players drafted by the Kraken. Today, I will offer some perspective that compares Seattle’s draft class with the rest of the league.

What are public draft analysts and scouting services saying about the Kraken’s draft picks? Looking at history, what can we expect from this class? And how do Seattle’s assembled prospects project relative to the field? We will consider these questions and more, and also offer some takeaways pertaining to other teams along the way.

We should note that it is wise to be guarded in the immediate aftermath of a draft. We do not even know what Shane Wright will be in the NHL, must less Seattle’s later picks. But, generally speaking, how does Seattle’s group project? Let’s dive in.

The Kraken accumulated a deep class of high-end talent

In case you missed it, before the draft, we gathered rankings from 19 public draft analysts and scouting services and developed a composite draft ranking: The Sound Of Hockey Big Board.

Seattle was the only team to select five players within the top-50 on the Sound Of Hockey Big Board. Buffalo and Montreal selected four such players each, and no other team drafted more than three. With long odds facing any prospect outside the top half of the first round, accumulating this depth of highly ranked prospects in a single draft is impressive. For context, nine teams left the draft with no players ranked within the top 50.

I like this approach to interpreting the projected impact of a draft class because it is less abstract than Wins Above Replacement (WAR) or similar metrics. As Josh Horton’s investigation demonstrated historically, even the largest draft classes can be counted as a success if they produce just a few NHL-level performers. Bader’s work quantifies those probabilities and helps us make projections.

Bader’s public findings are also a bit quirky in a few areas. For example, his results suggest a higher likelihood of finding a star performer in the late-first round than in the mid-first round. This is very likely an issue with small sample size.

For these reasons, I reverse engineered a smoothed model from his public findings that projects “likelihood” of being a star performer or NHLer based on draft position. Graphically, the models look like this:

I applied this model to the picks in the 2022 NHL Draft and created a projection of how many NHL lineup players and star performers each team can expect from its draft class.

(Note that some scouts have suggested this was a mediocre draft class. If so, all of the probabilities listed above could be downgraded, but the expectations of each team relative to the others should remain consistent.)

Based on pick position alone, the Kraken project to generate the fourth-most NHL players from the their draft class, with approximately three NHL regulars being an expected outcome. Only the Arizona Coyotes, Chicago Blackhawks, and Buffalo Sabres project to generate more such players.

When it comes to probable star power, again, the Kraken have the fourth-best odds of turning up a star player based on Bader’s model. In this measure, they rank behind only the Montreal Canadiens, Arizona Coyotes, and New Jersey Devils.

This should serve as something of a reality check on our expectations. A player picked at No. 4 overall is not a certainty to be a high-end performer. If Shane Wright becomes a 65-to-70-point producer on an annual basis, the Kraken will have out-performed their “star” expectations in this draft, even before considering the rest of this class.

Projecting future contributions using the Sound Of Hockey Big Board

The expectations set forth above assume historical average draft performance at each draft position. The results do not tell us anything about whether a draft class could be expected to over-perform or under-perform its draft position.

In an effort to gain some perspective on this question, I also applied Bader’s work to the players drafted in the 2022 NHL Draft based on their Big Board rank, rather than draft order. In other words, I engaged in a thought experiment: What if the Sound Of Hockey Big Board represented the “correct” order in which players would have ideally been drafted? In that scenario, the first player on the Big Board would be ascribed the highest likelihood of becoming a star or NHL player under Bader’s analysis, and so forth down the line.

To be clear, this is not how Bader’s work was intended to be used. This alternative view is simply meant to give some perspective on how each draft class could expect to turn out if the 19 public scouting services we compiled were “right” about the proper ordering of this class.

By this metric, the Seattle Kraken fare even better relative to the competition, projecting to produce both the most NHL lineup regulars and star performers from this draft.

In terms of raw figures, the Kraken project to generate slightly fewer lineup regulars than expected based on their draft position alone (3.03). This is due in large part to Seattle “reaching” far down the Big Board to draft goalie Niklas Kokko at No. 58. And, while the Kraken are No. 1 overall, Montreal, Buffalo, Arizona, and Chicago all closely trail Seattle, each projecting to produce just under three NHLers.

The Kraken take by far the biggest leap up in terms of likelihood of generating a star player, however. This is largely due to the fact that Seattle procured the No. 1 overall player on the Big Board, Shane Wright, at the fourth pick. Conversely, Montreal and New Jersey tumble down in their “star” probabilities because, in the eyes of the Big Board, those teams reached for Juraj Slafkovsky and Simon Nemec, respectively.

Other draft classes stood out, for better or worse

The Carolina Hurricanes project to exceed draft expectations because they employed a very specific strategy. The Big Board study suggests that the Carolina Hurricanes produced the most NHL-level talent relative to the team’s draft capital. Carolina turned picks projected to generate the 20th-most value in the league and procured the 12th-most value according to the Big Board. How did Carolina accomplish this? The strategy was clear: target Russian players that other teams were reticent to select. Of course, it remains to be seen if global events create a long-term impediment to those players joining the NHL. But “on paper,” the draft looks good.

The Detroit Red Wings characteristically underperformed according to public draft boards. Perhaps unsurprisingly, the Big Board was not a fan of Detroit’s draft. Steve Yzerman-managed teams have notoriously veered away from consensus in their draft decision making, yet they still seem to uncover stars (remember, Detroit went “off the board” with the No. 6 pick in 2019 and selected now-rising-superstar Moritz Seider). Detroit utilized the eighth-most valuable draft capital, but produced just the 16th-most value according to the Big Board.

The Chicago Blackhawks may have also left value on the table. To add insult to the injury that has been Chicago’s NHL-level offseason moves, the Big Board did not like Chicago’s draft either, relative to the the draft capital utilized. According to the Big Board, Chicago reached on every single one of its picks except for its second first-round pick Frank Nazar. For similar reasons, the Big Board downgrades the Arizona Coyotes’ draft too.

The Kraken had a productive draft. Needing to build out the team’s prospect pool, volume was a focus: the team made 11 draft picks overall. But the Kraken did not sacrifice high-end quality either, generally winning rave reviews from draft analysts for their ability to find highly ranked prospects with their six picks in the top 68.

According to Hockey Prospecting’s historical work, Seattle fans can reasonably expect three-or-more of the team’s picks to emerge as NHL regulars down the road, with a 50-50 chance that one of those regulars develops into a star player.

If the Big Board is to be believed, Seattle’s draft may over-perform even those lofty expectations. This Kraken class may project as the best in the NHL, and the team’s chances of finding a star player could rate significantly higher than expected based on draft pick value alone.

Now we wait and watch. With rookie development camp in the rearview mirror, preseason training camp will be our next opportunity to check in on the development of this class.