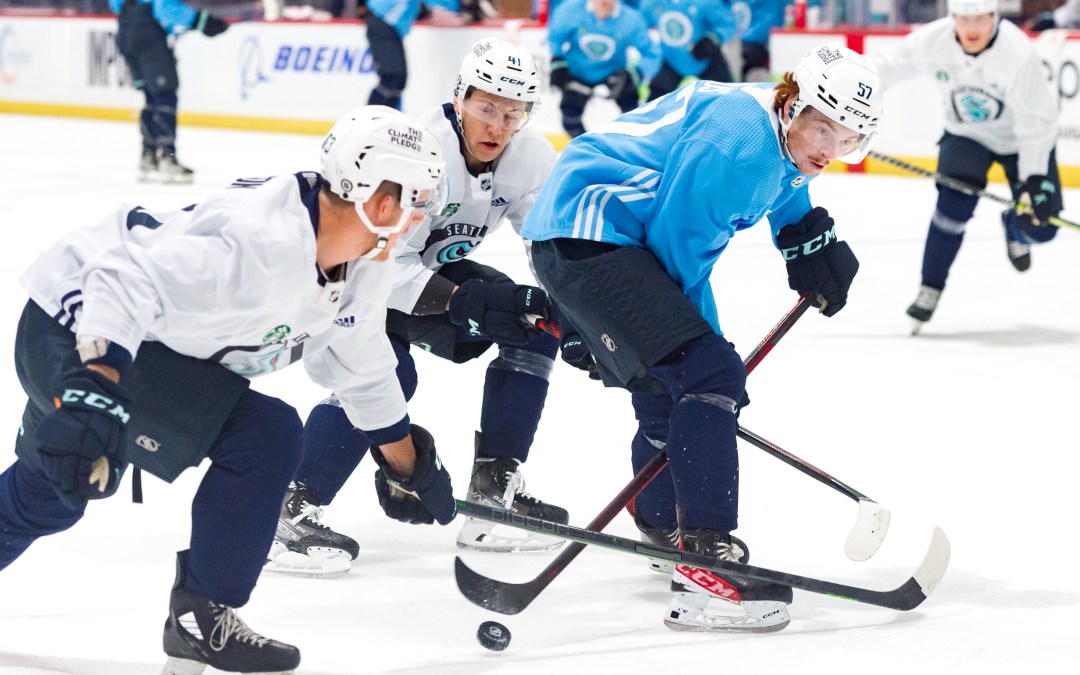 Who said hockey season was over?! What a wild and crazy week this has been for Kraken fans, who have been on quite the roller coaster ride.

After watching Seattle crush it in last week’s NHL Entry Draft, they got to see the team’s future take the ice at Kraken Community Iceplex for the first time at this week’s development camp, then sit on pins and needles as the team somewhat cautiously dipped its toe into free agency.

It hasn’t quite been the headlong dive into free agency that we expected, but we have some theories on that, which you’ll read about in this edition of Weekly One-Timers.

Development camp was an interesting experience. We got our first look at all the players selected by Seattle in the draft in Montreal, plus some young players that were selected and/or signed last year.

Predictably, Matty Beniers (who showed up remarkably tan, by the way) was the star of the show and dominated the three-on-three scrimmage tournament on Wednesday. He looked like a man amongst boys and seemed to have the puck on a string, making confident and sometimes borderline cheeky moves against his fellow youth.

While we’re still bracing for an adjustment period from the 19-year-old center, Beniers demonstrated again that he is a cornerstone for this franchise for many years to come.

Speaking of cornerstone centers, No. 4 overall pick Shane Wright made his first appearance in Seattle. His best play of the three-on-three tournament came toward the end of the last game, when he fired a perfect 100-foot pass through the neutral zone right onto the tape of a breaking Luke Henman. Henman went in alone and scored, helping lead the light blue team to a tournament championship.

Throughout the camp, Wright looked as advertised — strong, swift on his skates, and frankly ready for NHL competition. At the close of the three-on-three scrimmage, general manager Ron Francis came onto the ice and announced to the crowd in attendance that Wright was going to sign his entry-level contract right then and there. It was a memorable moment that ended with a huge cheer from the fans and Wright’s first ceremonial fish yeeting.

Looking ahead to the 2022-23 season, our expectation is that Wright will break training camp with the Kraken. The Kraken have the option to either keep him in the NHL for the full season or send him back to the OHL’s Kingston Frontenacs. Due to an agreement between the NHL and CHL, Wright cannot play in the AHL. If he goes back to Kingston, he would not burn the first year of his entry-level contract, but we are of the mindset that he has nothing left to prove at the OHL level. The Kraken can play Wright in nine games before deciding to keep him or send him back down to juniors, per the aforementioned agreement.

We think he will stay even if he has a slow start, but we shall see.

Aside from Beniers and Wright, Ty Nelson, Tye Kartye, and Jagger Firkus were the three players that stood out to us the most at development camp.

Kartye, 21, is a year (or two or three) older than a lot of his competition in camp, but every time he was around the puck, we seemed to notice him.

Nelson, an 18-year-old defenseman selected No. 68 overall, is built like a sparkplug. He’s swift on his feet and positions his body in a way that makes it impossible for opposing players to take the puck off his stick. He also has a downright infectious personality, so we will be rooting for this kid.

Speaking of infectious personalities, Jagger Firkus really did bring the Firkus Circus to town. He looks very small on the ice — which makes sense, since he is currently only 158 pounds — but when he adds weight to his body, there is NHL-level skill there. Heads were spinning at the scrimmage when he slipped the puck between Jacob Melanson’s legs, then shot from between his own legs.

This kid is good.

We should also note, Melanson and Ryan Winterton (who was not on the ice at camp) also signed their respective entry-level contracts this week.

Kraken free agency not much of a frenzy… so far

We have a hard time believing this is what Francis meant when he said months ago that the Kraken would be “aggressive” in free agency. Though the team has signed a lot of players since Wednesday, most of the signings are clearly to build out the Coachella Valley Firebirds roster.

We do think Seattle has marginally improved by shoring up the right defense position with Justin Schultz and upgrading on the wing with Andre Burakovsky. But neither of those players are “needle movers” that will individually catapult the team into the playoffs next season. Of course, Wright could also help, but it is hard to project how much an 18-year-old player can contribute to an NHL club.

There are still some big names out there, like Nazem Kadri and John Klingberg, plus some second-tier forward options like Nino Niederreiter, Sonny Milano, and Evan Rodrigues. The Kraken still have north of $9.8 million in cap space and could go over the cap if they put Chris Driedger on long-term injured reserve.

By no means do we think the team is done improving its roster, and we also do not see it as a coincidence that Seattle still has that much space, considering there are guys like Kadri and Klingberg still available. If things remain quiet on the free agency front for the Kraken, then expect trades in the coming weeks.

The biggest story of free agency was undoubtedly Johnny Gaudreau’s shocking decision to sign with the Columbus Blue Jackets. It became clear just a day before the opening of free agency that Gaudreau was turning down an eight-figure-per-year offer from the Calgary Flames and would hit the market.

The Philadelphia Flyers— widely rumored to be Gaudreau’s preferred destination — did not make the star center an offer, citing a lack of cap space and further infuriating their fanbase.

As for the Kraken, we haven’t officially heard that Seattle ever had a chance at landing Gaudreau, but we did ask Francis if the team was interested. Here’s what he said: “Yeah, we were interested in everybody coming to play here.” [Smattering of laughs from assembled media.] “Sometimes players want to play in certain markets or closer to home or different things. So, there’s a lot of factors that go into those final decisions.”

That indicates to us that Seattle at least reached out to Gaudreau’s camp.

Winners of the week

There were a few teams around the league that really improved themselves this week. Columbus jumps out, thanks to Gaudreau, but look out for the Ottawa Senators and Detroit Red Wings next season, two teams that have languished near the bottom of the standings for a long time.

Meanwhile, the Yzerplan in Detroit jumped ahead a few spaces on the game board, when the Red Wings traded for and signed Ville Husso, then landed Ben Chiarot, Dominik Kubalik, Andrew Copp, and David Perron on the open market.