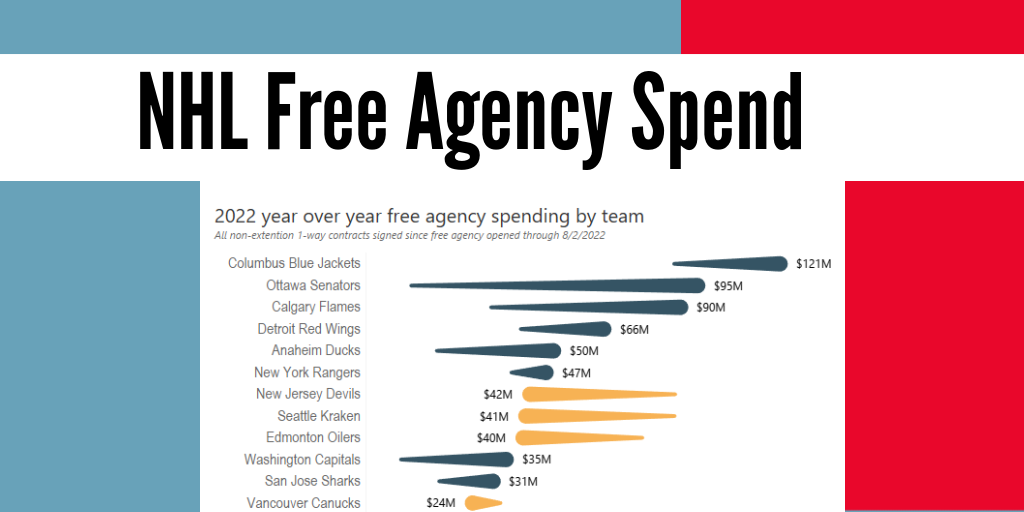 With the signing of John Klingberg last Friday, we can start to do some analysis of the free agency period this offseason. There are still plenty of NHL players out there, but they will trickle in until late September, and it feels possible Nazem Kadri will wait to “officially” sign with the New York Islanders until the night before the Islanders kick off their training camp. Still, there’s enough data now to take a look at how this free agency period stacks up to prior seasons.

Here is a look at the cumulated total of commitments by day of free agency.

It is challenging to determine what is driving the drop in signings other than teams are feeling the cap crunch right now and hoping to find bargains by waiting it out.

The Average Annual Value, often referred to as AAV or salary cap hit, is down slightly compared to last year. Even though there are still some signings to be made between now and training camp in September, this number should stay in line with the current $2.2 million average AAV.

When you break it down by team, the list at the top is predictable and obvious, based on the deals getting announced over the last few weeks.

Columbus went big with Johnny Gaudreau at $68 million, but they also re-signed Patrik Laine to a contract worth a total value of $35 million. Some people might be surprised to see Calgary in the top three, but remember that Matthew Tkachuk was a “sign-and-trade” to the Florida Panthers.

A couple other items of note:

Here is a look at how teams’ spending commitments compare to last year.

During free agency last year, the Kraken were a brand-new franchise and theoretically had a lot more flexibility. This season, they had cap space but leveraged that space with the Oliver Bjorkstrand trade and signings of Andre Burakovsky, Martin Jones, and Justin Schultz. Here is the detail behind the Kraken free agency spending.

The pandemic-impacted flat salary cap continues to impact free agency signings. After an increase in AAV from 2017 to 2019, average AAV in 2022 has not reached pre-pandemic levels as teams continue to get closer and sometimes over the salary cap. The cap will eventually increase, but in the meantime, there are several players that are seeing their earning power diminished in critical times in their respective careers.