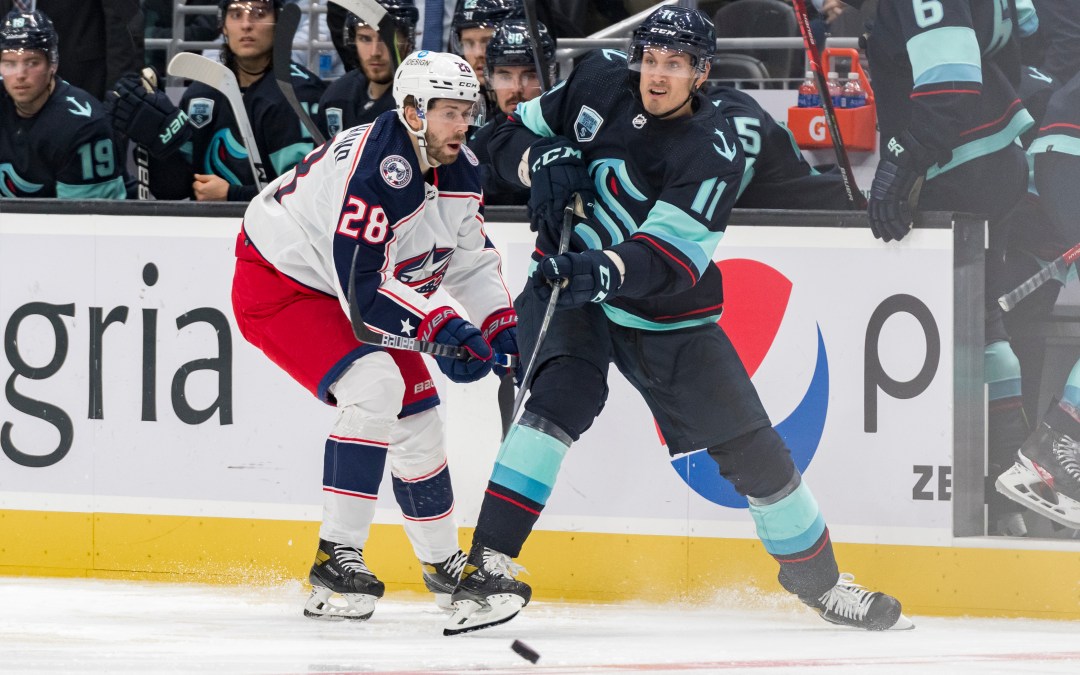 We knew it. We just knew the Kraken weren’t done making moves this offseason, and they showed on Friday that they were willing to use up most of their remaining $9+ million in cap space to make themselves better. The team announced that it had acquired 27-year-old Danish winger Oliver Bjorkstrand from the Columbus Blue Jackets for third- and fourth-round draft picks in 2023.

Each of the two picks given up had been acquired by Seattle in previous trades with Calgary and Winnipeg, and the Kraken did not have to sacrifice any of their growing prospect pool. Those picks were draft capital well spent, as the team landed a true top-six talent for a bargain price.

Interestingly, Bjorkstrand was a third-round pick himself, back in 2013, but has vastly exceeded the expectations that typically come with being the No. 89 overall pick. “We’re excited to welcome Oliver to our organization,” general manager Ron Francis said via press release. “His creativity and hockey sense will be good additions to our forward group.”

The Kraken got a steal here.

Oliver Bjorkstrand by the numbers

Bjorkstrand is coming off a career year in Columbus, in which he scored 28 goals and 29 assists in 80 regular-season games. Last season wasn’t a flash in the pan, either, as he has eclipsed the 20-goal mark three times in the last four campaigns. In 2019-20, Bjorkstrand potted 21 goals in just 49 games. So, there is a real track record there of offensive contributions by a player who simply demanded playing time in Columbus’ top six.

Advanced analytics folks are high on Bjorkstrand as well, with Top Down Hockey giving him a projected wins above replacement rating of 92 percent.

Evolving Hockey gave Bjorkstrand a 90 overall rating, placing him in the 82nd and 89th percentiles respectively for offense and defense. They also said this:

The Blue Jackets shocked the hockey world when they came out of nowhere and signed Johnny Gaudreau to a seven-year deal at a $9.75 million cap hit. They followed that up by signing Patrik Laine to a four-year extension at a $8.7 million cap hit, and suddenly Columbus was projecting to be way over the salary cap.

So, to free space, they moved Bjorkstrand. One team’s cap crunch is another team’s treasure (we’re pretty sure that’s how the saying goes).

Bjorkstrand signed an extension with Columbus in January of 2021. The deal runs through the 2025-26 season at a very fair annual cap hit of $5.4 million. This means the Kraken will project to have about $3.6 million in cap space left, but some of that will need to go to restricted free agent Morgan Geekie, who filed for arbitration earlier in the week. If Seattle ends up going over the cap, they have the option of placing Chris Driedger on long-term injured reserve, which temporarily would give them $3.5 million in additional space.

How does Bjorkstrand fit in with the Kraken?

On our latest Sound Of Hockey Podcast episode, we mentioned we thought there was still a glaring hole in Seattle’s forward lineup. 24 hours later, that is no longer the case, as the team’s roster suddenly looks mostly set and significantly more like a contender than it did earlier in the week.

Using JFresh’s roster builder tool, we slotted Bjorkstrand into a second-line role with Andre Burakovsky and Alex Wennberg. The tool predicted 94 standings points for the Kraken in 2022-23, but lacking sufficient data on Matty Beniers, the tool only allows us to insert him as a replacement-level player. We believe Beniers will be far above a replacement-level player. Plus, Shane Wright is not even factored in here.

We were concerned that Seattle had only marginally improved in free agency, but now that the team has layered in a trade acquisition of Bjorkstrand, a guy who can play at both ends of the ice and score at even strength and on the power play, the Kraken could be a playoff contender after all. We still think there is an upgrade that could be made at right defense, but unless that comes by way of a dollar-for-dollar trade, such an addition would put the Kraken into a cap crunch of their own.