Storylines for week one of Seattle Kraken Training Camp 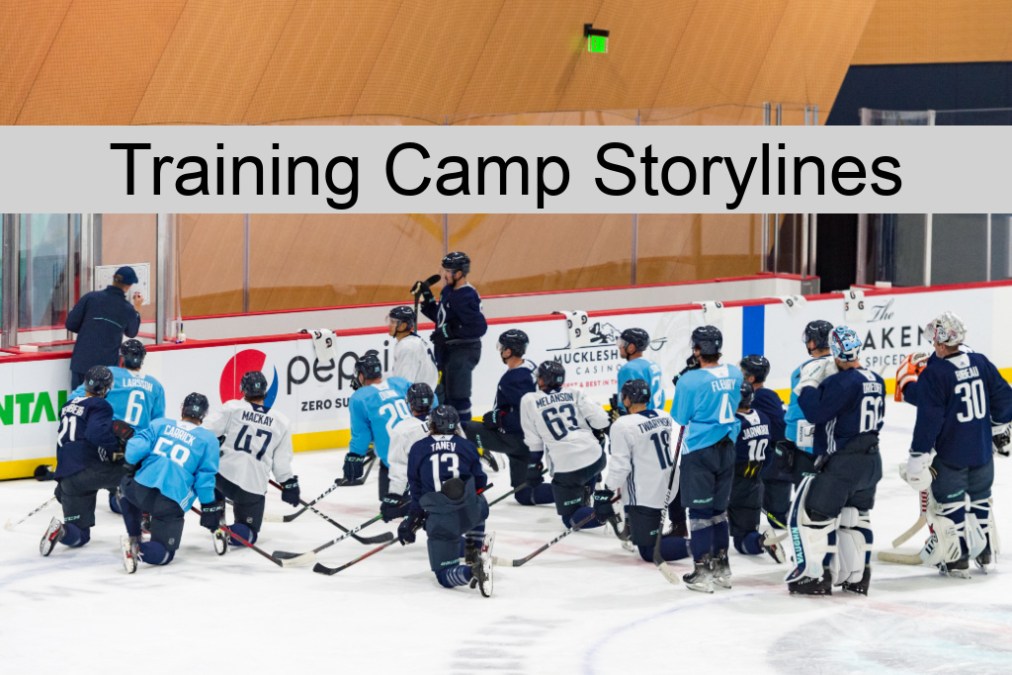 We made it through the long and dull summer in Seattle, a period otherwise known as the NHL offseason. The kick-off of rookie camp is a special time for us hockey sickos, and we are here for it. On Sunday, the Seattle Kraken announced their training camp rosters with Monday and Tuesday dedicated to the rookies on the squad and the main camp starting Thursday. We are seven days away from the first preseason game against Edmonton at Climate Pledge Arena, so we thought now would be a good time to look at some storylines to monitor for Training Camp. Here’s what to keep an eye on in week one.

With the selection of centerman Shane Wright in the 2022 NHL Entry Draft, the Kraken have a positional challenge to consider. Add Wright to the quiver of Matty Beniers, Alex Wennberg, Yanni Gourde, and Morgan Geekie, and now the club has five centers for only four spots. One of them will center the fourth line and another will need to move to wing. Lines can and will change a lot during the season, but it will be interesting to see who is getting the reps at center in the first few days of camp.

Who advances from rookie camp?

It is safe to say that Matty Beniers and Shane Wright are locks to move on from rookie camp to the main camp, but the bigger question is who else will stick around for a bit longer? Safe money is on Ryker Evans, the Kraken’s second-round pick from the 2021 NHL Entry Draft, who had an excellent season with Regina in the WHL. After Evans, it is a bit of a toss-up. Undrafted forward Ty Kartye signed an entry-level deal with the Kraken in March and could be one of the players to move on to the big camp at the end of the week. Another candidate could be 2021 fifth-round draft pick Jacob Melanson. He tends to fly under radar but put up 35 goals in 54 games in the QMJHL last season. Advancing from rookie camp to the main training camp does not mean the player is destined for the big club any time soon, but it might signal the potential these prospects have for reaching the NHL.

Seattle’s coveted first-round pick from the 2022 NHL Entry Draft, Shane Wright will undoubtedly get a lot of attention. We think he will be given every opportunity to make this team, but it is far from guaranteed. Wright will need to prove he belongs in order to stay with the team all season. The coaching staff expects all the players to buy into their two-way game, and there is no doubt that Wright plays that style. But can he play that style in the NHL at 18 years old? Interesting to note, Cole Sillinger of Columbus was the only player taken in the 2021 draft to play the full 2021-22 season in the NHL.

If you are lucky enough to attend training camp in person, you will get to see reps and reps of the same drill. This enables you to focus in on individual players and compare them to each other doing the same drill. Keying in on Beniers for individual drills will be something special to watch, as his creativity and skill should be on full display. This will also be the first time we get to see offseason acquisitions Oliver Bjorkstrand and Andre Burakovsky up close and personal in Kraken jerseys. Bjorkstrand and Burakovsky have amazing shooting capabilities, and seeing them fire pucks in volume at practice should be a treat. A Bjorkstrand, Burakovsky, and Beniers line does sound cool, but it is premature to think it will happen or stick for the long term.

Brandon Tanev and Jaden Schwartz were having productive seasons in 2021-22 before being sidelined by injuries. In Tanev’s case, he had season-ending knee surgery after a freak play against the Edmonton Oilers in mid-December. Schwartz’s diagnosis was never disclosed, but he was in and out of the lineup throughout the second half of the season. In both cases, the fanbase should be hopeful they return to pre-injury form. Both have been skating at Kraken Community Iceplex, and early reports are that they look good. Training camp should be a little more telling of where both those players stand in the recovery process.

Those are just a few of the storylines to watch throughout training camp this week. Keep any eye on SoundOfHockey.com and our twitter account all week for various reports from training camp as we ramp up to the start of the season.