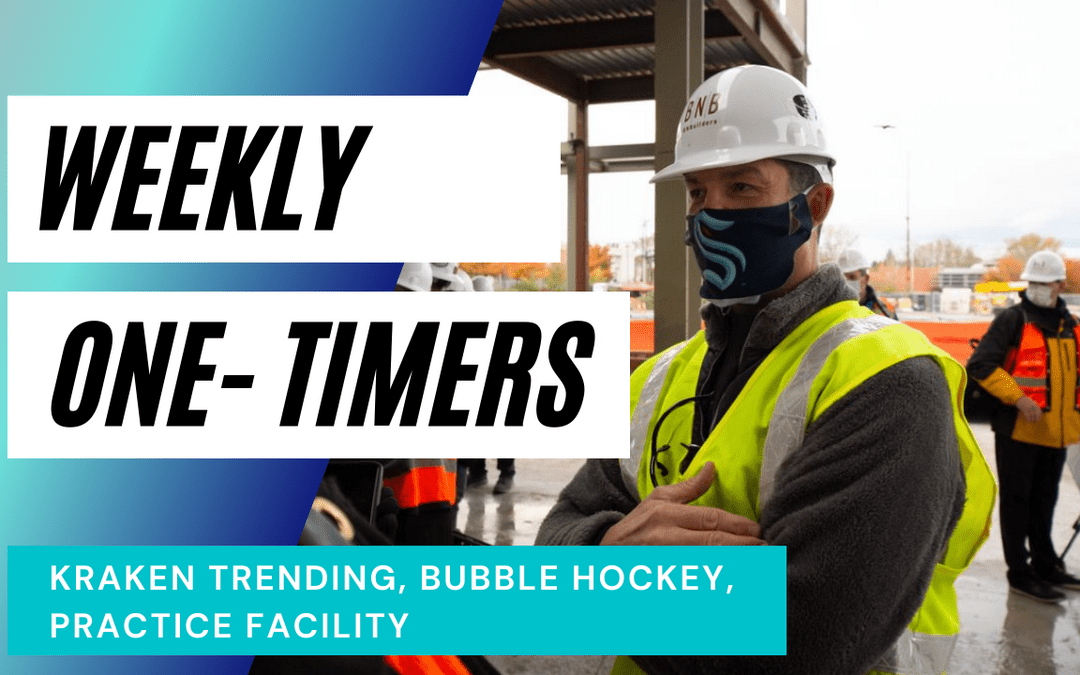 Bubbles? Realignment? Everything is on the table as the NHL ponders the best way to proceed towards a plan to start the 2020-2021 season (don’t worry yet, Seattle Kraken fans). That may have to be amended to simply be called the 2021 season as the league has targeted a January 1 start date. Reading the tea leaves, it seems less likely there will be bubbles and more likely there will be a temporary realignment allowing for a Canadian Division as well as three divisions in the United States.

Greg Wyshnyski of ESPN has more details in a recent article from earlier in the week.

Here’s the part that should be of great interest to Seattle Kraken fans. The date of the Expansion Draft and the 2021 NHL Entry Draft will both depend on when the NHL finishes this season. The NHL finish date could also affect a little thing like the Kraken inaugural season opener.

Here are the rest of your Weekly One-Timers:

The Kraken invited the local hockey media into the Northgate construction site and the reviews were glowing. The future Kraken players will have all the amenities you can imagine, including a spacious lounge to relax in, a state-of-the-art training area, and a dressing room with the logo on the ceiling to avoid anyone stepping on it.

But it’s not just a place for the players. The team continues to look at Northgate as a community asset. Local adult and youth hockey will be able to take advantage of the three rinks as the Kraken estimate there will be 20,000 hours of ice time available.

There’s also a bar. Not just any bar either. Up above the NHL rink and one of the community rinks sits a pub that the club is hoping will become the top place to come and watch sports in the area. They’re already planning watch parties for home and away games.

The bar should open in September of 2021, a month after the NHL offices and facilities are on line.

Quebec Bubble Hockey! So… Hockey dans une bulle? Did we do that right? The Quebec Major Junior Hockey League’s return to play has been rocky to say the least. Time to pivot. It would appear that the league is headed to a quasi bubble strategy for the 2020-21 season. As of now, this will feature 7 teams headed to Quebec City from November 17th to the 27th to play 6 games each. Meanwhile the QMJHL Maritimes Division appears to be going relatively well.

NCAA Hockey has returned to play, kind of. All conferences operate independently and will have different return to play strategies and formats. The BIG 10 has indeed returned to play this weekend. Atlantic Hockey and Hockey East will begin conference play next week, and there will also be a whole host of other non-conference games. Wisconsin defeated Notre Dame 2-0 in the first college hockey game in nine months on Friday night.

Unfortunately, the Ivy League, which includes Men’s and Women’s hockey teams in the ECAC,  announced the cancellation of Winter Sports.

The Seattle Kraken were trending on social media on Friday, but not for a reason you might expect. The official team Twitter account put out this gem late Friday night, indicating that they weren’t initially sure what was up either.

Well, digging into the cause of it a bit, apparently one of Donald Trump’s lawyers, Sidney Powell went on Lou Dobbs Tonight and said this:

Moving forward, Sound Of Hockey would like to request that all Kraken-related catchphrases be kept off of Lou Dobbs Tonight. Thank you.