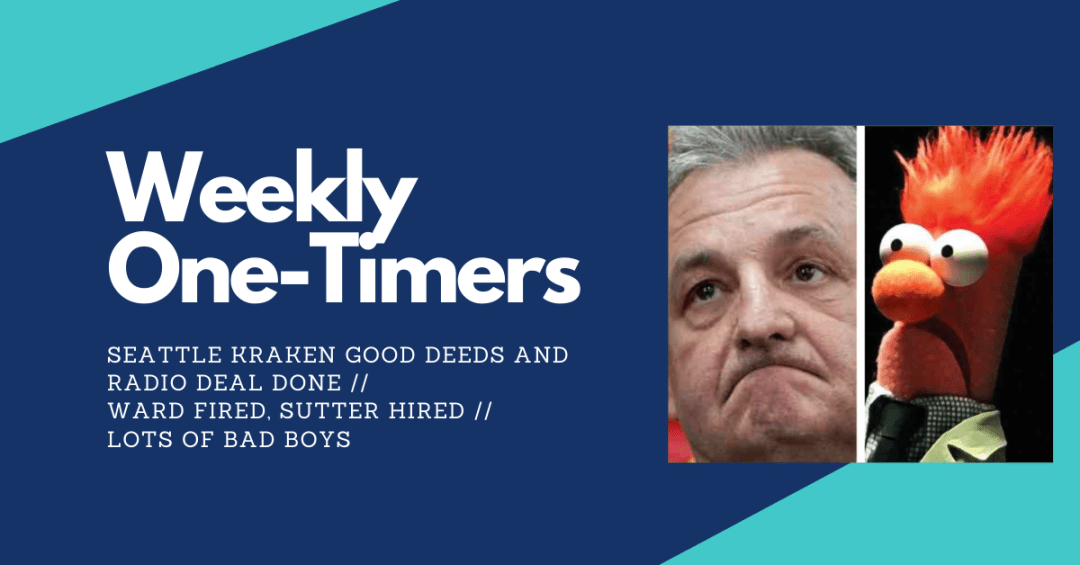 Welcome back to another thrilling edition of Sound Of Hockey’s Weekly One-Timers, where your knowledge of current hockey events will surely be augmented every seven (or so) days. We’re happy to have you here. Let us start with the latest Seattle Kraken news, shall we?

A week of good deeds

It’s been a week of good deeds for our soon-to-be favorite team, as the Seattle Kraken put their weight behind the University of Alaska Anchorage’s “Save Seawolf Hockey” campaign. It is widely known that the UAA hockey program is on its last legs unless it can raise $3 million to convince the school’s Board of Regents to include the program in its budget moving forward.

The Kraken pledged $200,000, but perhaps more importantly, launched a massive marketing campaign to bring awareness to the cause and to urge fans to donate.

$200K is a nice gesture, but really the main piece here is that it’s a brilliant marketing play by the Kraken, who have not been shy about wanting to include Alaska as part of their fanbase. This is an investment in the hockey community as a whole in Anchorage and beyond.

According to the Save Seawolf Hockey website, the organization has raised $1.8 million so far, but that has not been updated since Feb. 25.

The Kraken also announced that they will found an MBA program at Seattle University in partnership with the Mariners, Seahawks, Sounders, and Storm. The program focuses on helping persons of color and women gain high-ranking roles in the sports industry.

So many good deeds!

We’ve known for quite some time that friend of the Sound Of Hockey Podcast, Everett Fitzhugh, will be the voice of the Kraken over the radio airwaves, but we have not known exactly which airwaves. That question was answered this week when Seattle announced 950 KJR as its flagship radio partner. Read all about it here.

The deal was not exactly a closely guarded secret, as we’ve seen plenty of hints over the last year or two indicating that KJR would ultimately land the rights, but this makes it official.

Sure, KJR has been known to poo-poo hockey in the past, with hosts disparaging the Key Arena renovation plan and going so far as to say they would refuse to talk about hockey on the air if the NHL were to expand to Seattle. But that’s all irrelevant now! RADIO PARTNER! WOO!

Ward out, Sutter (back) in

Darryl Sutter and his incredible facial expressions and press conferences are back!

After Geoff Ward’s Calgary Flames defeated the Ottawa Senators on Thursday, he sat before the media and said this:

Minutes later, the Flames announced that Ward was out as head coach and that Sutter had been hired to replace him, reportedly on a three-year contract.

This is Sutter’s fifth stint as a head coach in the NHL and second with Calgary, where he spent three seasons in the early 2000’s, including a run to the Stanley Cup Final in 2003-2004. He won two Stanley Cups at the helm of the Los Angeles Kings and holds a career record of 634-467-101.

Ward was named interim coach of the Flames after Bill Peters resigned in Nov., 2019, amidst a well-documented racism scandal. Ward’s interim tag was only removed in Sept., 2020, so he did not make it a full season as the full-time head coach. The Flames—who had high expectations after signing a bunch of former Canucks in the offseason—are 11-11-2.

I always enjoyed a good side-by-side of Sutter with Beaker from The Muppets.

The reckoning in Montreal continues

This week, the Canadiens added goaltending coach Stéphane Waite to their list of recently axed employees. Waite has had a wildly successful career, winning two Stanley Cups with Chicago and spending eight seasons with the Habs, where he has guided Carey Price.

Montreal replaces Waite by promoting Sean Burke, who had been serving the team already as a goaltending consultant.

Could Waite be a candidate for the head goalie coaching job in Seattle? Absolutely. He will be a hot commodity, though, so if the Kraken want him, they will need to act quickly to get him into the fold.

Brent Seabrook retires hangs it up

Brent Seabrook, 35, has decided that his body just can’t take it anymore. After dealing with major hip and shoulder issues for years, and after battling so hard to get back to the level of play that made him central to Chicago’s three Stanley Cups, the veteran defenseman has decided it’s finally time.

In classic Blackhawk fashion, though, it’s not time for Seabrook to retire, but rather to announce he can no longer play because of injury, meaning Stan Bowman saves his cap space. But that’s neither here nor there.

Seabrook played 1,114 career games, all for the Blackhawks. He scored 103 goals and 361 assists. He unfairly became maligned in the last few years of his career for having too big of a contract, which certainly any Blackhawk fan would have rejected had they been offered such a lucrative deal.

The Blackhawks no longer have to protect Seabrook—who also had a no-movement clause in his contract—from the Seattle Kraken Expansion Draft, so they will now likely add either Nikita Zadorov or Lucas Carlsson to their protected list.

The Great One announced that his beloved father passed away this week.

We saw an outpouring of condolences and support from around the hockey world for the Gretzky family and “Canada’s favourite hockey dad.”

It’s always thrilling to include a bit of #Minnutiae in our Weekly One-Timers. The Wild have been surprisingly pretty good and had a sniff of first place in the Honda West Division before losing two straight to the division-leading Vegas Golden Knights. In the first of those two contests, Minnesota led late, with Marc-Andre Fleury pulled for an extra skater. Zach Parise extended his shift after what he called an attempt to help teammate Marcus Foligno get an empty-netter for his first career hat trick. The Wild failed to score, and with a tired Parise still on the ice, the Golden Knights tied the game. The VGK’s ultimately won in overtime, and Parise was widely blamed by Wild faithful for the loss.

The response by coach Dean Evason was to have Parise, 36, watch the second game of the series from the pressbox. Remember, Parise is on a 13-year, $98 million contract that pays him just north of $7.5 million AAV against the salary cap. He has never been scratched since signing that deal with Minnesota in 2012 and has racked up 391 points in 532 career games for Minnesota. He has been the face of the franchise for a long time. Evason has some serious cojones.

If you’re going to commit a fineable offense, you might as well get your money’s worth, and one could argue that Ovi got excellent value out of that vicious poke to the nether regions.

That said, we at Sound Of Hockey sincerely hope that Frederic was wearing a protective cup and that it had not shifted out of place, as those things tend to do under hockey equipment.

Brett Pesce pulled an obvious and very dirty slew foot on Robby Fabbri. Pesce was also fined $5,000—again, might as well get your money’s worth—for his actions, which we at SOH believe sets a bit of a dangerous precedent.

The slew foot is one play that makes every hockey player particularly angry because of the potential serious damage it can cause. Fabbri was lucky to not get injured on this play.

Former Portland Winterhawk Joachim Blichfeld was given a match penalty Wednesday and was subsequently suspended two additional games for his hit to the head of Nathan MacKinnon.

This was just the fourth NHL game of Blichfeld’s career and first this season. Oopsy daisy. Sounds like MacKinnon is fine.