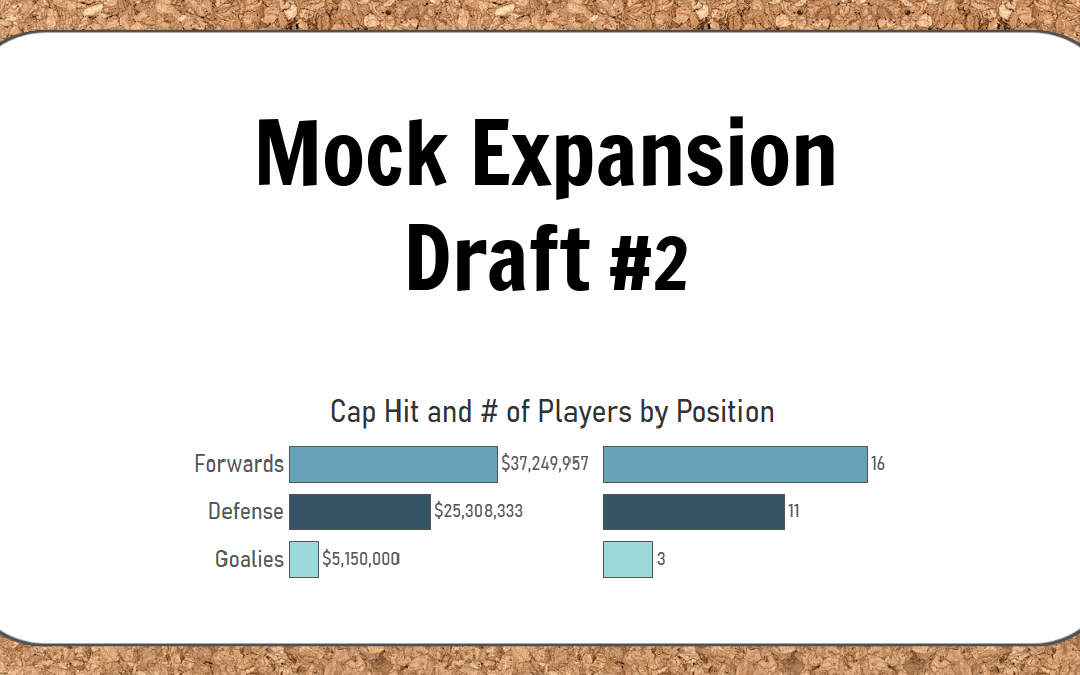 Let’s get something out in the open right now: The Seattle Kraken’s Expansion Draft strategy is going to look a lot different from this mock version. You bet your bottom dollar that Kraken general manager Ron Francis is going to work the phones, especially with cap-strapped franchises, and see what they can land as sweeteners.

But hypothetically, if Seattle didn’t make any side deals, this is my closest guess on what might happen.

In addition to every pick, I’ll explain my thought process and offer a “confidence rating,” meaning how confident I am in this player being destined for Seattle.

Anaheim: Josh Mahura — I love the idea of Mahura and the 22-year-old puck-moving blueliner is worth a look here. Confidence Level (CL): 8 out of 10

Arizona: Adin Hill — Hill is a trendy choice and for good reason. Young and capable goaltenders are hard to find and Hill has been terrific in his two starts this season for the Coyotes, who don’t boast the most inspiring potential exposure list. CL: 9

Boston: Jeremy Lauzon — I’m really bullish on Lauzon’s potential. At just 23 years old, he’s worth a sniff for Seattle, even with the Bruins’ pretty healthy list of potential players. (CL): 7

Buffalo: Henri Jokiharju — The former Portland Winterhawk star hasn’t broken out quite yet, but there’s still plenty more time for the 21-year-old to develop. His offensive upside is worth a peek. CL: 8.

Calgary: Sam Bennett — Bennett’s 2020-21 season has been nothing short of a disaster, but for now, his pedigree is worth a look. With reported trade requests, there’s a strong chance Bennett isn’t in the Flames organization by the Expansion Draft. CL: 6.

Carolina: Jake Bean — Bean is a Sound Of Hockey favorite and I’m firmly on the bandwagon. The former Tri-City American rearguard is playing regular minutes as a 22-year-old and he’s someone you could build the defensive corps around. CL: 9.

Columbus: Kevin Stenlund — To me, it’s between Stenlund and defensemen Gabriel Carlsson or Dean Kukan, but Stenlund’s progression this season is too encouraging to pass up. His ability to play center is a huge plus, too. There is a chance, however, that he’s playing his way into protection with seven points in 13 games. CL: 7.

Colorado: Devon Toews — Toews is a slam dunk choice for the Kraken. However, I doubt the Avalanche will let one of their best blueliners go for nothing. Colorado screams side deal. CL: 7.

Detroit: Troy Stetcher — Stetcher is the best player available from Detroit, and even though there are a lot of great options for defensemen in the Expansion Draft, nabbing Stetcher who can contribute from the get-go is a good proposition for Seattle. He’s also a good candidate to be flipped. CL: 6.

Edmonton: Tyler Benson — Quite frankly, there aren’t a ton of great options in our Edmonton projection and Benson is a good depth option with some upside.  CL: 6.

Florida: Chris Driedger — Is Driedger the Kraken’s goalie of the future? Driedger, 26, never broke through with Ottawa, but he’s been nothing short of fantastic for Florida this season, with a .818 quality starts percentage. We’ll see how that number changes when the sample size grows, but I love taking a stab at someone like Driedger, who even posted good numbers last season. His contract is up after this season, so this would be my one UFA signing, as allowable by the SOH rules. CL: 7.

Los Angeles: Trevor Moore — The 25-year-old would be a good depth piece for the Kraken with room to grow. CL: 7.

Minnesota: Matt Dumba —  I’m skeptical that Dumba will be left exposed. But he is a great selection if he’s available as an instant impact option on the blueline with star potential. CL: 6.

Montreal: Jake Allen — I’ve been infatuated with the idea of bringing Jake Allen in a goalie tandem for quite some time. With good periphery numbers with Montreal thus far, Allen and Driedger are the product of that vision. CL: 9.

Nashville: Matt Duchene — Sure, Duchene may be on the second half of his prime and carries a bloated $8 million average annual value (AAV), but finding a potential No. 1 center is too good to pass up. I’m not sold Duchene will be available, though, with trade rumors swirling around the Predators since a slow start. CL: 7.

New Jersey: Miles Wood — For a rebuilding team, New Jersey boasts some interesting options. Yegor Sharangovich and Janne Kuokkanen have both played decently high roles for the Devils this year, but Wood, who is tied with former Spokane phenom Ty Smith for the team scoring lead with 11 points, plays a rugged game and could be an identity-type player with the potential to produce offensively. CL: 8.

New York Islanders: Nick Leddy — Leddy is someone I’ve always enjoyed while watching the Islanders play and I love the idea of his smooth skating and offensive upside playing on a second- or third-pairing role in my hypothetical Kraken squad. What’s more, you’d think a Barry Trotz-coached defenseman has good defensive habits drilled into him, right? CL: 8.5.

New York Rangers: Brett Howden — With plenty of hockey left ahead of him and the ability to play center, Howden is a relatively easy choice from the Rangers, who are bereft of many exciting options. CL: 9.

Ottawa: Nicholas Paul — Paul is the choice here because he’s relatively young and has been decently productive for the Senators this season. CL: 9.

Pittsburgh: Teddy Blueger — While Blueger isn’t a sexy choice, centers are not easy to find. CL: 7.5.

San Jose: Dylan Gambrell — Gambrell is the choice because he’s ready immediately to contribute in a bottom-six role. The Bonney Lake, Wash. native’s local angle is a nice plus. CL 9.

Tampa Bay: Mathieu Joseph — The Lightning offer a robust group of players for selection, but when are productive 24-year-old forwards with upside available without giving something up in return? One could envision Joseph blossoming into a top-nine consistent contributor from his fourth-line role in Tampa. CL: 7.

Toronto: Denis Malgin — Malgin might be a bit of an off-the-wall pick, considering he’s playing this season in Switzerland. He’s still just 24 years old and three years removed from a 22-point season. CL: 4

Vancouver: Kole Lind — Lind is a great organizational depth pick with the upside to turn into more. CL: 8 .

Washington: TJ Oshie — No, I’m not taking Oshie because he’s Seattle’s preeminent local hockey connection. I’m taking him because he’s still damn good at hockey. And also because the Kraken will need to get to the salary floor and his $5.75 million AAV salary will help with that.

Winnipeg: Sami Niku — I went back and forth between Niku and Mason Appleton, but young rearguards’ upside couldn’t be ignored with this choice. Plus, he’s slowly earning more playing time. Winnipeg might be ripe for a side deal in order to keep players like Appleton and Niku. CL: 8.

As we see it, there are going to be terrific options to build a really exciting blueline. While the forwards aren’t super inspiring, and Jake Allen and Chris Driedger are a bit of a gamble as a goalie pairing, this team could be decent from the jump.

But, as we’ve discussed: Keep an eye on side deals.

Sound Of Hockey will have additional versions of the Mock Seattle Kraken Expansion Draft in the coming weeks, so be sure to check back regularly!