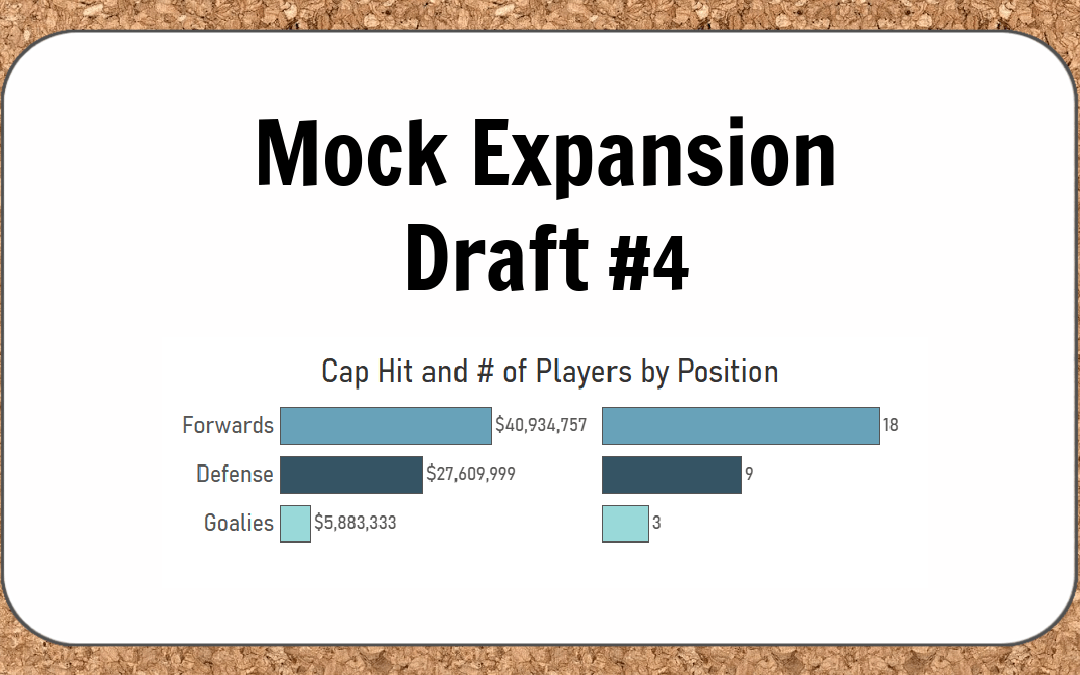 Like the previous three that were written by colleagues John Barr, Josh Horton, and Darren Brown, I found the exercise fun and harder than it would appear. It turns out that it’s easier to mock other people’s drafts than it is to mock your own Expansion Draft.

Also, this gives me the chance to do two things I don’t actually enjoy – writing in first-person and doing a mock draft. But I’m a team player and so here my neck is, out and exposed.

When doing this I tried to put myself into the head space of Kraken general manager Ron Francis to figure out how he would go through the Expansion Draft process. I also imagined what it was like to win the Stanley Cup, which Francis has done twice. It seems like it would be nice, so let’s hope that is what he ends up doing here in Seattle.

I tried to balance youth with experience for my first Seattle Kraken Expansion Draft. I say ‘my first’ but let’s face it, nobody is going to ask me to participate in a real one, ever. Finding that balance is harder than it seems. It’s also made harder since we are tied to the rules we established. Trust me, I tried to make an exception or two, but was told I couldn’t.

These mocks come after a great deal of effort and – I think – level-headed guess work, as we tried to predict how the protection lists of the other 30 teams would look. You should definitely check those out at some point; they are worth your while.

After a brief look at those rules, we’ll get into it with my team. A feisty, scrappy, and hard-working group that will win at least 20 games, year one. Plan a parade.

Anaheim: Danton Heinen (LW) – The Ducks have a couple of veteran defensemen who could make intriguing picks, but I felt I could get defensemen elsewhere so went with winger Danton Heinen. I don’t expect scoring from a guy who will be a depth winger, but I want him to win shifts and his career positive Corsi and expected goal numbers show he can do that.

Arizona Coyotes: Adin Hill (G) – Hill, who played for the Portland Winterhawks, is a promising 24-year-old goaltender. He has the potential to be a number one but may still need some seasoning as a backup for a year or two. More on that later in this draft.

Boston Bruins: Nick Ritchie (LW) – Another young forward, Ritchie drives the play and could end up in the Kraken’s top six. If the Kraken can get players like that in the Expansion Draft then they will be in good shape.

Buffalo Sabres: Cody Eaken (C) – There is not a lot to choose from off of the Sabres roster as things are not going so well in Buffalo. I nabbed Eaken here as a veteran of over 600 games who could provide experience in the bottom six.

Calgary Flames: Sam Bennett (C) – Bennett has recently begged out of Calgary so lets get him a new home and hope he can bring his playoff success into the regular season.

Carolina Hurricanes: Jake Bean (D) – The Hurricanes have a number of good players who will be exposed and I’m picking up Bean here. A former first-round pick of Francis, he’s coming off a season where he won the AHL’s Defenseman of the Year award and should work his way into a top-pairing role with the Kraken.

Chicago Blackhawks: Brandon Hagel (LW) – Hopefully Hagel doesn’t play himself into being protected by the Blackhawks, but he’s 22 and only getting better. He will probably end up protected, but within the rules of this Mock Draft, I’m taking him.

Colorado Avalanche: Devon Toews (D) – An obvious choice here and Seattle will add a top-pairing defenseman. If the Avalanche choose to protect him, it will open up other nice options for Francis and the Kraken.

Columbus Blue Jackets: Eric Robinson (LW) – Speed is the name of the game in today’s NHL and Robinson has it. That’s enough for me to add him here.

Dallas Stars: Jason Dickinson (C) – Watch veteran Joe Pavelski here. If he’s exposed by the Stars, which could free them of his high salary, he might be the pick. But we have him protected so I’m going with Dickinson who is a possession center.

Detroit Red Wings: Troy Stetcher (D) – The picking is slim with the Red Wings but I like Stetcher as a bottom-pairing defenseman. He won’t be flashy but plays a solid game.

Edmonton Oilers: Tyson Barrie (D) – Barrie is having a strong resurgence this season and will be a nice, puck-moving defenseman for the Kraken. His underlying numbers are solid, and I’m using my one UFA allowance here, which won’t break the bank.

Florida Panthers: Anton Stralman (D) – I’m going with a veteran two-way defenseman, but I’m interested to see if the Panthers expose Patric Hornqvist. If they do, I might be tempted to add him and his offense.

Los Angeles Kings: Olli Maatta (D) – I wasn’t blown away by what the Kings have to offer, and I went with Maatta who’s better days may very well be behind him. I like him for depth and the Kraken would only need to pay him for one more season.

Minnesota Wild: Matt Dumba (D) – This is a no-brainer pick as Dumba is a top defenseman and still early in his career. There are rumors out there that the Wild could move him before the Kraken can get their mitts on him. If that’s the case, then I’d go with another defenseman in Carson Soucy.

Montreal Canadiens: Jake Allen (G) – It is becoming more and more clear that Allen is destined for Seattle in the Expansion Draft to become Seattle’s starting goalie. I like him to serve as a mentor for the younger, less proven, goalies I’m stocking up on.

Nashville Predators: Connor Ingram (G) – Speaking of unproven goalies, I’m taking a swing at one with Ingram. He’s put up great AHL numbers but has yet to play an NHL game. If all goes well, Ingram and Hill take over the crease in a couple of seasons.

New Jersey Devils: Miles Wood (LW) – Wood has a glue-guy type of game and every team can use on of those, so welcome to Seattle, Miles.

New York Islanders: Josh Bailey (RW) – Another veteran who does a little of everything. You can’t go wrong with Bailey in your lineup.

New York Rangers: Brendan Lemieux (LW) – Boy, most of the Rangers’ interesting players are not available in the Expansion Draft so come to Seattle, Lemieux, here’s a nice Kraken jersey for you.

Ottawa Senators: Chris Tierney (C) – Another veteran from a team without a lot of exciting options. He can play and is having an OK season for a bad Senators team.

Philadelphia Flyers: Shayne Gostisbehere (D) – I like defensemen who can score so I’m taking the ‘Ghost Bear’ from the Flyers. There are other options here up front and keep an eye on Jakub Voracek. Gostisbehere is not the best defensive defenseman but he’ll be my power play guy.

Pittsburgh Penguins: Teddy Blueger (C) – I like Blueger’s game. He won’t light up the scoreboard but can kill penalties and give you good minutes every night.

San Jose Sharks: Alexander True (C) – It came down to the two hometown guys with the Sharks. I took True over Bonney Lake’s Dylan Gambrell because he’s younger, bigger, and I like big centers.

St. Louis Blues: Zach Sanford (LW) – I wanted a power forward up front and Sanford gives me that.

Tampa Bay Lightning: Ondrej Palat (RW) – The Lightning have a number of options and are probably primed for a side deal with the Kraken that will give Seattle an Expansion Draft bounty of sorts. I’m taking Palat here as he has the potential to be a staple in the Kraken top six.

Toronto Maple Leafs: Adam Brooks (C) – I’m taking another swing here at future potential with Brooks. He’s scored at the lower levels. Can he in the NHL? Let’s find out.

Vancouver Canucks: Kole Lind (LW) – Perhaps the Canucks’ top prospect, Lind is knocking on the NHL door and we could strike gold here.

Washington Capitals: T.J. Oshie (RW) – Honestly, I wanted to avoid being the Kraken message board hero here. I don’t believe in drafting guys with local ties to breed excitement amongst the fans. I only want productive players. Turns out, Oshie is still productive, so let the reunion begin.

Winnipeg Jets: Logan Stanley (D) – If he’s exposed, I like Stanley. He’s huge and physical and will anchor what will now be known as the “imposing Kraken blueline”.

The thing that jumps out at me when trying to predict who the Seattle Kraken select in July’s Expansion Draft is that centers are at a premium.

Most of the talent available to Francis is on the wing and on defense. Center is important so it will be a position that may need to be addressed in free agency or in the NHL Draft. It may also be something the Kraken can fill through side deals or trades.