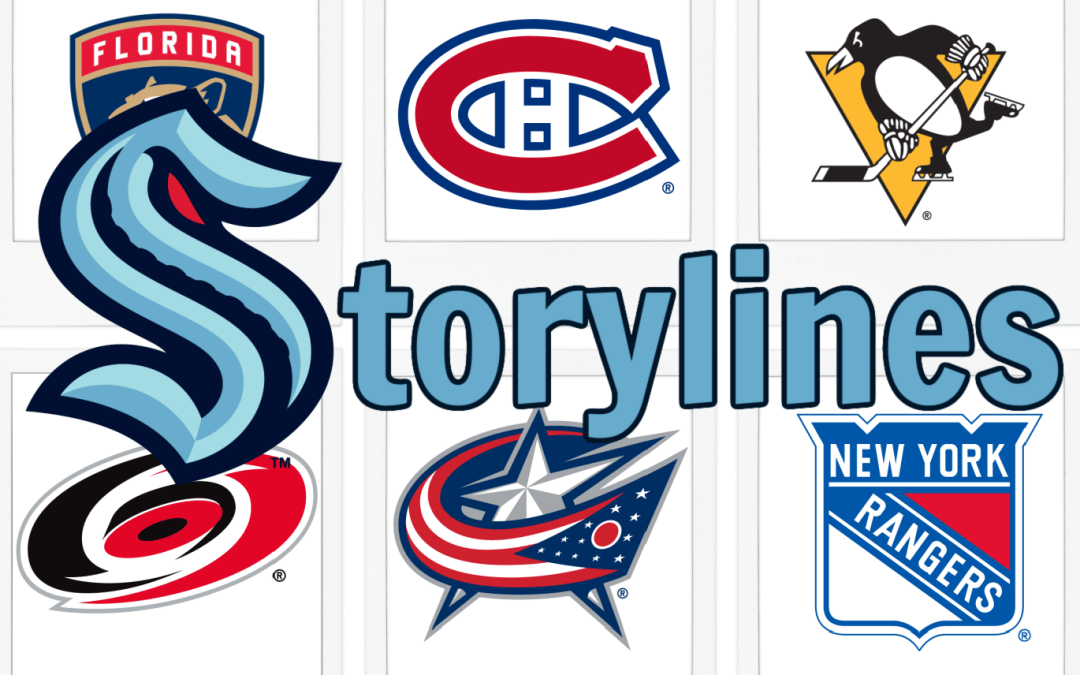 As the NHL season kicks off this week, here are some storylines Seattle Kraken fans should keep an eye on with the teams from the conference formerly known as the Eastern Conference.

The Bruins do not have many questions leading up to the Expansion Draft this summer. The Kraken will probably focus on evaluating the skill level of some of the younger options in that organization.

Specifically, Trent Frederic, 22, and Jakub Zboril, 23, who played 99 percent of their games in the AHL last season.

Is Buffalo a playoff team? Once we know the answer to that, we will get a better read on what they do with Taylor Hall.
Hall signed a one-year deal this summer, but if Buffalo is out of the playoff race around the trade deadline, the Sabres might salvage his value by trading him for draft picks. Assuming Hall does not sign a contract extension in Buffalo (or with another team), he won’t be protected and the Kraken will have the opportunity to sign Hall during the club’s 48-hour exclusive free agent negotiating window.

I have a huge bias for young players when looking at the Expansion Draft and two names that I have had circled for a long time are Morgan Geekie and Jake Bean.

Both players are 22. Geekie played two games in the NHL last year while Bean was in the AHL the entire season. The question is how much do we see them this year and what type of steps do they take in their professional careers?

In case things don’t go well for either of these guys, Haydn Fleury, 24, is the next one on deck.

Will they move Pierre-Luc Dubois before the Expansion Draft?

Dubois projects to be an elite center in the NHL, but he recently expressed interest in getting traded out of Columbus. If they do trade him, the questions become who they get in return and how does that player impact who they protect in the Expansion Draft.

Detroit is not a team Kraken fans should be overly excited about right now, but one to monitor for the Expansion Draft is how good Danny DeKeyser looks since undergoing back surgery early in the 2019-20 season.

There aren’t a whole lot of open questions in Florida. If I am isolating a few players to put on a Kraken watch list in Florida it is Markus Nutivaara and MacKenzie Weegar. At least one of them will be exposed in the Expansion Draft.

Montreal possesses a glut of quality forwards on expiring contracts. Joel Armia, Phillip Danault, and Tomas Tatar are all notable forwards that Montreal would love to keep beyond this season. If the Canadiens sign any of these players to extensions, they will want to protect them in the Expansion Draft.

I love the former Everett Silvertip and I am absolutely rooting for him to have a great season. Staying healthy has been a huge challenge for the 27-year-old blue liner, though. If he stays healthy and has a solid season, he could be protected in New Jersey which will expose PK Subban, though Subban also needs to have a bit of a rebound season to be considered by the Kraken next summer.

Additionally, Kyle Palmieri is set to be an unrestricted free agent next summer, and if they resign him, it will impact the Devils protected list.

Do the Islanders expose Josh Bailey or Jordan Eberle? And what kind of season do we see out of Otto Koivula and Kieffer Bellows? It is likely that only one of the four players mentioned can be protected, so we should keep an eye on all of them.

Will Ryan Strome maintain his playing from last year when he was close to a point-per-game player? Or will he play at a level more in line with his career? And not that this has anything to do with the Kraken, but we’re all curious to see how Alexis Lafreniere fares as a rookie.

The Senators won’t offer a large selection to choose from come the Expansion Draft, but they might have a goalie of interest. They added Matt Murray from Pittsburgh this offseason, and if he delivers on his expectations, he will be the protected netminder. That would expose Joey Daccord, a highly respected 24-year-old goalie prospect, for the Kraken.

Nolan Patrick, who missed the entire 2019-20 season due to migraine issues, is forecasted as one of the protected forwards in Philadelphia. He is at camp and is reportedly moving full steam ahead for the coming season, but there is still questions about whether he can fight off the health issues that kept him out last year.

If he is healthy and can perform, then he will be protected, exposing Nicolas Aube-Kubel or Jakub Voracek.

Pittsburgh will more than likely expose two of the three forwards of Brandon Tanev, Teddy Blueger, or Jared McCann. Ideally all of them have great years to provide Seattle quality options.

If the Lighting protect four defensemen in the Expansion Draft it will come down to their confidence in 2017 first-round draft pick, Cal Foote. Foote is expected to make his NHL debut this year and should be able to showcase his long-term potential in the NHL.

If Foote lives up to expectations, the Lightning will protect him with fellow defensemen Victor Hedman, Mikhail Sergachev, and Erik Cernak. Protecting four defensemen will force the Lightning to expose forwards Ondrej Palat, Yanni Gourde, and Alexander Volkov.

There is not much debate on who the Maple Leafs will protect in the Expansion Draft. Travis Dermot should be exposed on defense. In the forward group, Kraken fans might want to keep an eye on pending UFA Jimmy Vesey to see if he shows any promise for Seattle.

Alex Ovechkin is on the last year of his contract with the Capitals. There is no doubt in my mind that Ovi will play in Washington next season, but it seems to me they could save a valuable spot in their protected list by waiting for him to get to free agency and then signing him.

Those are just some of the storylines to keep an eye on in the Eastern Conference this year.