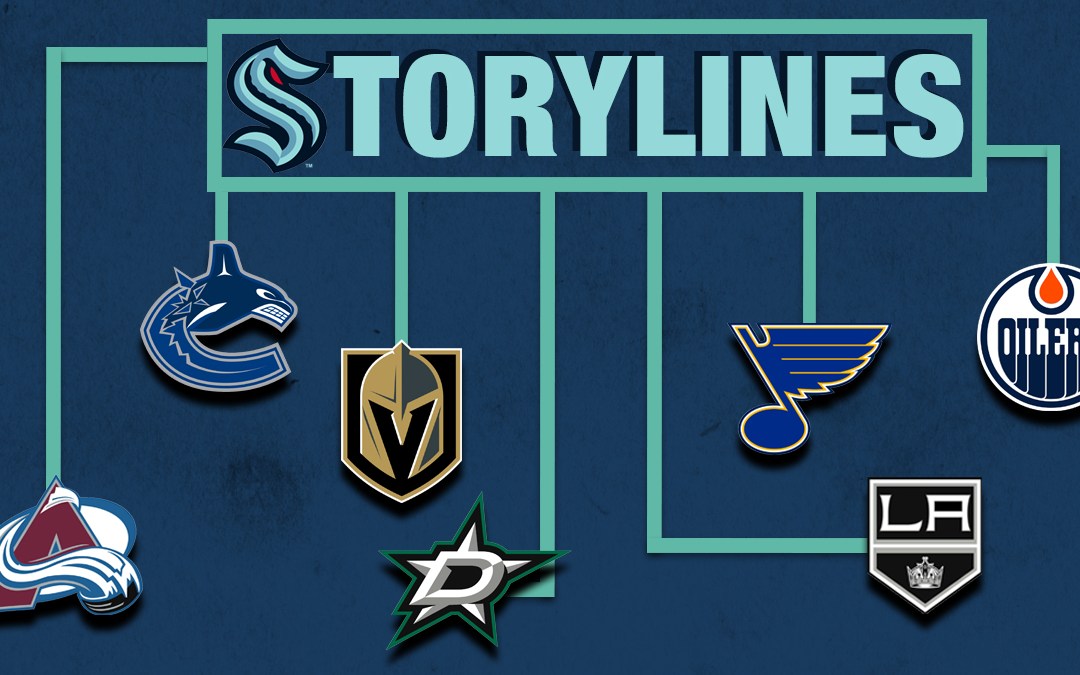 A few days ago, we stepped through all the “Eastern Conference” teams (yes, we recognize there are no conferences this season) and identified some of the major storylines that could impact the Seattle Kraken Expansion Draft in July.

Today, we look to the teams that typically play in the conference formally known as the Western Conference.

The Ducks added Kevin Shattenkirk this offseason, and if he plays to his expected level, Anaheim might be forced to protect four defensemen (Shattenkirk, Cam Fowler, Hampus Lindholm, and Josh Manson) in the Expansion Draft. This could expose Max Jones, Isac Lundestrom, and Adam Henrique.

Kuemper was one of the top goalies in the league last year — his .928 save percentage was third in the NHL among goalies with at least 20 games played — so the thought of trading him seems a bit outrageous. However, the Coyotes are thin on draft picks and prospects after the Taylor Hall trade and the sanctions taken by the league last season for illegally working out prospects.

The burning question is if Milan Lucic will waive his no-move clause or not. If he does not waive his NMC, the Flames could expose Mikael Backlund and Sam Bennett which will create good options in the forward position. There is also a scenario where Lucic waives his no-move clause and Calgary subsequently offers draft picks to the Kraken to take Lucic and his $6 million dollar cap hit.

Similar to Lucic’s situation in Calgary, the same can be asked about Brent Seabrook in Chicago. Will he waive his no-move clause for the Expansion Draft? If he does, this does not mean Seattle will take him. We are projecting Connor Murphy, Lucas Carlsson, and Calvin De Haan to all be exposed by Chicago, but if Seabrook waives his NMC, one of them will be protected. This question should be answered in April.

Any uncertainty in Colorado surrounds pending UFAs Brandon Saad, Gabriel Landeskog, and to a lesser extent Philipp Grubauer. If any or all those players are signed to a contract extension before the Expansion Draft, they will be protected. Signing Saad and Landeskog will expose young center Tyson Jost, a name we have had circled for a while. Signing Grubauer would eliminate the opportunity for the Kraken to talk with him during the exclusive (to the Kraken) UFA discussion window before the expansion selections are due to the league. If they were to convince Grubauer to sign with Seattle, he would be the Kraken’s starting goalie in year one.

Dallas’ player pool is thin as far as the Expansion Draft. The ideal scenario is that veteran Stars, Anton Khudobin and Joe Pavelski, continue to play at a level beyond their age would suggest. They might create an opportunity for Seattle to select either of these players in the Expansion Draft and immediately trade them to another team that could use their veteran presence.

The Oilers’ approach to the protected list in the Expansion Draft hinges on Oscar Klefbom’s status. He is already out for the season, but it’s worth wondering if the Oilers will still protect him. If they do opt to protect him, it is a safe assumption that they will protect four defensemen (Ethan Bear, Darnell Nurse, Caleb Jones, & Klefbom) which will force them to only protect four forwards. This would most likely expose Jesse Puljujarvi and Tyler Benson. Whichever player of that duo shows the most promise this year would be a good candidate for the Kraken.

The biggest flier for the Seattle Kraken to consider off the LA Kings roster would be Lias Andersson. The road to the NHL for the No. 7 overall draft pick of the 2017 NHL Entry Draft has been anything but smooth. The change of scenery to LA might be just what he needs but there is no guarantee the Kings protect him. If Andersson shows promise this season, the Kings might feel the need to protect him in lieu of protecting Blake Lizotte or Austin Wagner.

Matt Dumba has been rumored to be on the trading block all offseason. The Wild already possess three defensemen with no-move clauses that they are required to protect in the Expansion Draft. Protecting a fourth defenseman in Dumba would expose a young promising forward like Jordan Greenway. The general thought is that instead of losing him in the Expansion Draft, they trade him. A Dumba trade would greatly impact who is available for the Kraken.

Ryan Johansen’s productivity has dipped, and the 28-year-old center has not lived up to his $8 million cap hit. If Johansen sees another down year, there is a scenario where the Predators expose the former Portland Winterhawk. Even if he is exposed, it does not mean Seattle will necessarily select him in the Expansion Draft.

A bad year by Johansen could open the door for a possible side deal.

There is speculation that San Jose might expose Brent Burns in the Expansion Draft, but the players I am keeping an eye on are Bonney Lake’s Dylan Gambrell and former Seattle Thunderbird Alexander True. Gambrell has a significant opportunity to establish himself as an everyday NHL forward while True, who is a year younger than Gambrell, might spend another season in the AHL. Both players will have a lot to prove regardless of where they play, and Ron Francis might consider taking one of these younger depth forwards for the Kraken.

Vladimir Tarasenko was placed on long-term injured reserve and is going to be re-evaluated in May. That is pretty much the whole season. If Tarasenko does not play during this truncated campaign, the Blues could expose Tarasenko to dare Ron Francis to take a chance on the injury prone winger. Exposing him will enable St. Louis to protect Sammy Blais or Ivan Barbashev.

I have seen a lot of people penciling in Braden Holtby as the Seattle Kraken’s starting goalie in the inaugural season, but I am not so sure. Holtby will need to show significant improvement from his career worst .897 save percentage last year before Seattle considers selecting him out of Vancouver. Keep an eye on him this season.

The Golden Knights are not participants in the Expansion Draft, but they could certainly be a major participant in the trade market that would impact other teams’ protected lists. Keep an eye on any big moves that involve Vegas.

The Jets have yet to re-sign restricted free agent and former first-round draft pick, Jack Roslovic. He was projected as a bubble protected/exposed player in the upcoming Expansion Draft, but now he could be on the move. No matter what, Roslovic’s status will impact the Expansion Draft scenarios coming out of Winnipeg.