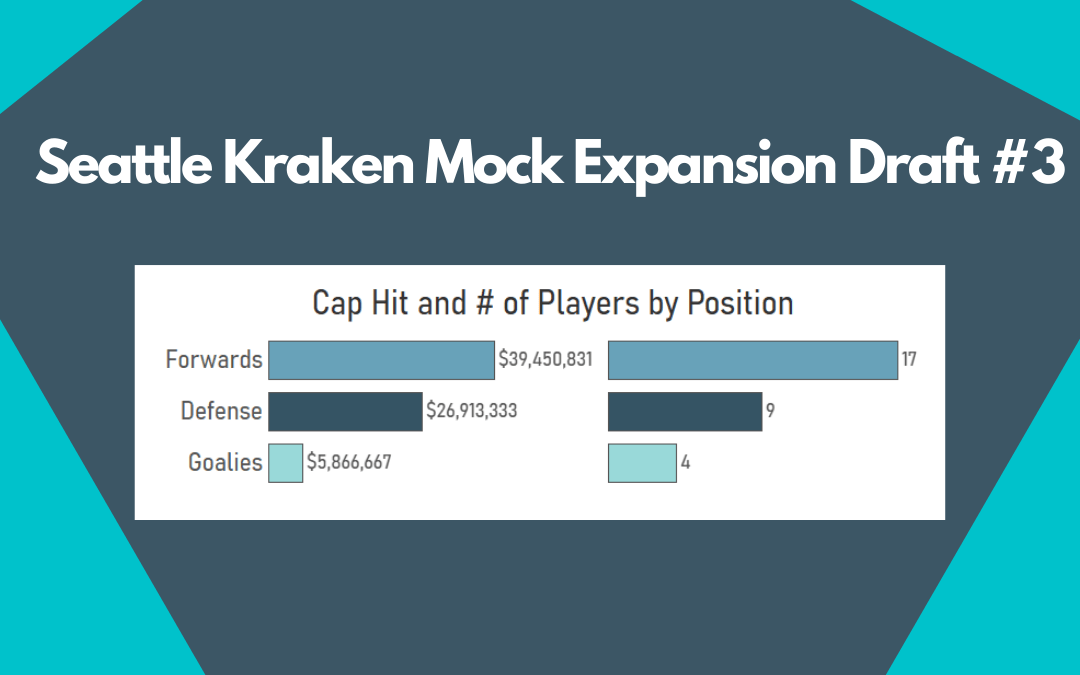 I was warned by my Sound Of Hockey colleagues that doing this Mock Seattle Kraken Expansion Draft exercise would be challenging. Of course, I wondered how hard it really could be, but in the end, their warnings should have been heeded.

As we were going through the process of profiling all 30 teams participating in the Expansion Draft, it was relatively easy to look at most rosters and say, Here are the two or three guys I’d want the Kraken to consider.

The problem with that is when you draft the full roster, you have to build the team with players that actually fit. You must consider age and salary and more importantly position. For example, the rough draft of my roster had too many forwards and not enough defensemen, so I had some late swaps. It is not as simple as looking at which players will be available and simply picking based on how good you think they are.

All of that is meant as a way to manage your expectations of the roster that I’ve built here so that you aren’t excessively hard on me in the comments.

Like Josh Horton, I too have included a numeric confidence level (CL) with each pick in my explanations below.

Anaheim: Josh Manson (Defense) – Defense is the best option out of Anaheim. I used to think Josh Mahura was the pick here, but he hasn’t stuck in the NHL yet. If Kevin Shattenkirk ends up available, I’d consider it, but for now, I’m going with the known quantity in Manson. His minutes have been limited this season, but he missed significant time with an oblique injury and played a huge role last season. Confidence Level (CL): 5 out of 10

Arizona: Adin Hill (Goalie) – I wanted to go against the grain here, but all desert roads lead to hills, or in this case, Adin Hill. Darcy Kuemper is injured again, so Hill should get some starts for the Coyotes in the coming weeks. CL: 9

Boston: Jeremy Lauzon (Defense) – There’s a lot to like about Lauzon’s game, and I’ve seen his name occasionally written as Jérémy with not one, but two accent marks. That’s incredible! Just 23 years old, he has been playing big minutes on the blue line for a good Boston team. Nick Ritchie is the other option here, but I love the upside and multiple accent marks of Lauzon. He currently is out with a broken hand but will return this season. CL: 7

Buffalo: Tage Thompson (Center) – I’m still intrigued by the idea of signing pending UFA Taylor Hall, but he’s having a bad season, so we’ll use the UFA draft-and-sign elsewhere. Yes, I know that Thompson has fallen out of favor in Buffalo (as has the entire team), and I know it hasn’t been a good season for him. But he’s 23, he’s huge, and he was once a highly touted prospect, so it’s a low-risk gamble from a roster filled with relatively poor options. CL: 3

Calgary: Sam Bennett (Center) – Bennett has never lived up to expectations, but there is undeniable grit and talent here. Considering the alternatives in Calgary, Bennett would be worth a selection. CL: 6

Carolina: Jake Bean (Defense) – I had selected Morgan Geekie here initially, but this was one of my “too many forwards” last-minute replacements. Bean is a fine choice, though, and will instantly find a significant role in Seattle’s defense corps. Carolina has a few good options, so Ron Francis really cannot go wrong. CL: 8

Chicago: Brandon Hagel (Left Wing) – With Brent Seabrook hanging it up, Stan Bowman no longer needs a protection slot for him, so Nikita Zadorov is now most likely covered. Hagel has been very good, though, and is likely to actually be protected. The more probable options are Calvin de Haan or Lucas Carlsson, but based on the rules of this exercise, Hagel is available so I’m taking him. CL: 2

Colorado: Devon Toews (Defense) – Colorado is another roster where Francis and company cannot go wrong. Toews would be a top-pairing defenseman for the Kraken. If he ends up protected, it opens other very intriguing doors. CL: 7

Columbus: Eric Robinson (Left Wing) – The last forward protection slot in Columbus likely comes down to Robinson or Gustav Nyquist. Robinson is exposed on our list, so I’ll take him. This will be a depth selection, but Robinson plays every game for the Blue Jackets and earns regular minutes from Torts. CL: 6

Dallas: Jason Dickinson (Center) – We once thought Joe Pavelski or Anton Khudobin would be the choice out of Dallas, but Pavelski has been one of the league’s best players and will be protected, while Khudobin has come back down to earth. Dickinson can play a regular shift and chip in at least a little offensively. Perhaps he could flourish in an expanded role. CL: 4

Detroit: Givani Smith (Left Wing) – Smith was the SOH favorite to be picked from Detroit this past offseason, but alarm bells were sounded when he was sent to the AHL early on. It appears Steve Yzerman is committed to having his young players develop in the minors, though, so this shouldn’t dissuade the Kraken from picking Smith. The veteran option would be Troy Stecher, but I like Smith’s upside enough to give him a try. CL: 5

Edmonton: Caleb Jones (Defense) – I don’t love the options in Edmonton. Jones hasn’t been a big contributor at the NHL level but had good numbers in the AHL. He is also still just 23, so perhaps there’s some upside left. CL: 3

Florida: Chris Driedger (Goalie) – This is my one UFA draft-and-sign pick. Driedger has had a breakout season with the Panthers, who are contenders in the Central largely because of him. The UFA status makes me question the likelihood of Driedger landing with the Kraken, but I would love to see it. CL: 2

Los Angeles: Sean Walker (Defense) – Andreas Athanasiou was my initial pick here, as I’ve really liked his game in my viewings of the Kings this season. Alas, my roster was unbalanced, so some forwards had to go. Instead, I’ll take Walker, who plays a decent-sized role on LA’s blue line. I hope he doesn’t look like this anymore when he arrives in Seattle. CL: 6

Minnesota: Matt Dumba (Defense) – Ironically, it was Dumba who hit Walker in the face with a slap shot, creating the aftermath above. I still don’t buy that Dumba will be available in the end, but we have him exposed based on the current roster, so he’s the obvious pick. If the Wild don’t trade Dumba, my guess is that Bill Guerin will figure out a way to get Zach Parise to waive his NMC so he doesn’t have to expose Jordan Greenway or Joel Eriksson Ek. For now, I gladly select Dumba. CL: 4

Montreal: Jake Allen (Goalie) – Like how all desert roads lead to Hill, all French-Canadian rues lead to Jake Allen. I still think he needs to be in a platoon to be successful, but Allen should have some good goalie talent to share Seattle’s crease with him. I like Victor Mete as well, but Allen just makes too much sense. CL: 9

Nashville: Ryan Johansen (Center) – The Predators have two $8 million cap hits to deal with in Johansen and Matt Duchene, neither of whom is contributing enough to warrant such a high salary. But somebody will have to center Seattle’s top line, and Johansen can do that. Perhaps a change of scenery will help him bounce back to the Johansen of yore, and perhaps Francis can even get David Poile to throw in a sweetener to take this massive contract off Nashville’s books. I take Johansen over Duchene because Johansen is two years younger, and his contract expires one year earlier than Duchene’s. CL: 3

New Jersey: Yegor Sharangovich (Left Wing) – There are a few equally intriguing young players to choose from in New Jersey, but I’m going with Sharangovich. The 22-year-old Belarussian is developing nicely and seeing some top-line minutes with Jack Hughes. CL: 7

New York Islanders: Nick Leddy (Defense) – Leddy would slide right into Seattle’s top four and only has one year left on his contract after next season. A smooth skater and very reliable blueliner, Leddy feels like a perfect fit as a one of those guys that contributes for a couple years to help launch an expansion franchise, then moves along. CL: 6

New York Rangers: Brett Howden (Center) – Do I love this pick? No. Do I think there are better alternatives for the Kraken on Broadway? Also no. Howden has not been impactful this season, but he’s still just 22 and has shown promise the last couple years. CL: 8

Ottawa: Chris Tierney (Center) – Again, not the best options available in Ottawa. Tierney has gotten some top-line minutes on a bad Senators team and is a proven NHLer, though, so at the very least can help fill out the bottom six for the Kraken. CL: 5

Philadelphia: James van Riemsdyk (Left Wing) – JvR is Philadelphia’s leading scorer, so it’s hard to say if he’ll actually be made available. If he is out there, I take him because Seattle will be desperate for guys who can put the puck in the net. CL: 6

Tampa Bay: Ondrej Palat (Right Wing) – The Lightning are another one of those where Seattle can’t go wrong when selecting from their roster. Palat is the best available player, so I’ll go with that, but if I’m Francis, I’m definitely swinging for a side deal here. CL: 8

Toronto: Justin Holl (Defense) – We used to think Travis Dermott was the pick from the Maple Leafs, but he isn’t getting as much time as I would have expected. I’ll go with the more reliable and more proven Holl. CL: 7

Vancouver: Kole Lind (Right Wing) – Gone are the days when we assumed Braden Holtby would land in the Kraken goal crease. Here are the days that we think an AHLer is the best choice from the Canucks. To be fair to Lind, though, he’s having a great season in the AHL and has oodles of upside. CL: 8

Washington: Vitek Vanecek (Goalie) – I wanted TJ Oshie, but his term and age scared me off. Vanecek is a stud. If Washington protects him over Ilya Samsonov, then Samsonov would also be a good pick. CL: 9

Winnipeg: Mason Appleton (Right Wing) – Appleton is having a bit of a break-out this year for the Jets, scoring seven goals and six assists so far. He grinds it out on the third line but plays behind some elite talent, so one has to wonder what he could bring in an expanded role. He scored a beautiful goal on Tuesday. CL: 7

I’m exhausted, and I apparently love centers. I’m too tired to try this again, though, so I’m going to hope some of my centers can play wing.