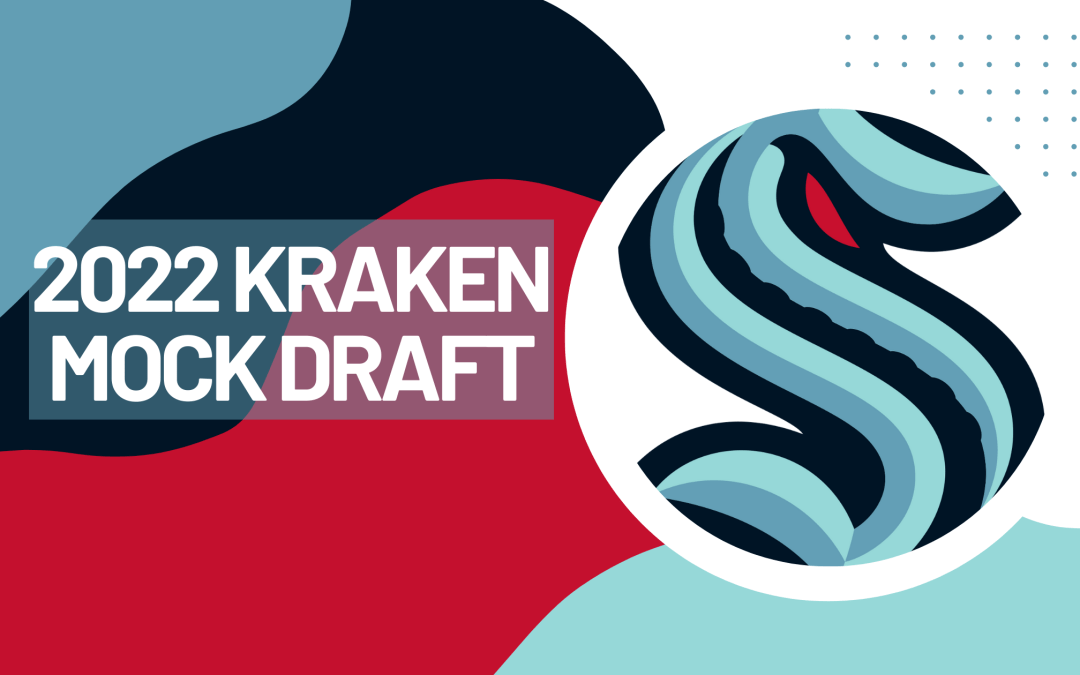 It is draft week

Many long-held questions will soon be answered. Who will the Kraken take at No. 4? Will Seattle package any of its picks in a trade? If so, with what goal, draft picks, or veteran players? Where will Thunderbirds players Reid Schaefer and Jordan Gustafson end up? Will goalie Thomas Milic be drafted this time around? We would love to hear your take. Feel free to leave your thoughts in the comments below or reach out to us on Twitter.

Our own John Barr, Andy Eide, and Darren Brown will be talking about the Kraken’s plans for the NHL Draft on this week’s Sound Of Hockey Podcast. Also, be sure to check out the rest of our draft coverage on the website, including the Sound Of Hockey Big Board, Andy’s draft profiles of Reid Schaefer, Simon Nemec, and Jordan Gustafson, John’s draft primer, and my prospect preview identifying more than sixty draft prospects that drew our attention based on their underlying analytics relative to consensus draft projections. Also, take a look at our analysis of NHL draft pick trades.

On Thursday and Friday, the Sound Of Hockey team will also be delivering live draft analysis. Keep it here for all of your Kraken draft content.

Today, we’re doing our inaugural Sound Of Hockey mock draft. For today’s exercise, we will presume that players will come off the board approximately in the order predicted by the Big Board. For example, as much as I may like Lane Hutson as a draft prospect for the Kraken in the early second round, we’re going to presume that he is off the board by that point because his Big Board rank (No. 34) is higher than Seattle’s first second-round pick (No. 35).

One complicating factor is the status of Russian players. Recent news about Russians attempting to leave that country to join NHL teams is truly alarming. Given the geopolitical climate, I think we’d all be fooling ourselves if we were to simply presume those players will be available to join their NHL clubs. That may be true. Or we may be looking at a decade or more of visa issues or closed borders. Indeed, the fallout may extend to current players too.

With the gravity of the Russian crisis unfurling each day, we are not confident that the draft stock of Russian players is fully captured by public lists, many of which were completed weeks ago. Accordingly, we are operating on the assumption that Russian players may fall, perhaps as many as 50 spots, below their projected draft stock on the Big Board.

We will also operate on the assumption that Seattle management is not comfortable with drafting Russian players at all in the top half of the draft. To be clear, this not informed in any way. This is purely an assumption I am using for this mock draft exercise. It is also a regrettable assumption because a few of my favorite prospects in this draft class, including Gleb Trikovoz and Vladimir Grunidin, are Russian.

Finally, taking a cue from Ron Francis that the team may not use all of its 12 draft picks, I am wildly predicting one trade will involve the Kraken shipping out one of their four second-round draft picks. I’ll predict the Kraken send No. 49 and No. 117 overall to Edmonton for Jesse Puljujarvi. I will still include one or more “alternative picks” at each spot in an attempt to predict the direction the Kraken could go if they do not make such a trade.

Notes: If, as most predict, Shane Wright, Juraj Slafkovsky, and Logan Cooley are drafted in the top three, we think the Kraken will opt for Simon Nemec over the other remaining options at No. 4. He is a modern defenseman, capable of driving transition play and quarterbacking a power play. His offensive zone passing is a great strength according to many scouts. And this is a skill the Kraken are sorely lacking. Nemec will likely need to be paired with a stronger defensive partner, particularly at first, but he has a high floor as a top-four blue line contributor. If Arizona goes off script and Cooley remains on the board at No. 4, we think Cooley would receive strong consideration. If both Nemec and Cooley are there when the Kraken are on the clock, who would Seattle take? That’s a tough one, but we’d lean toward the dynamic forward, Cooley. That said, we’re predicting that Nemec is the pick and that he’ll sign and begin the year with Coachella Valley.

Notes: The highest ranked player on my analytics board still available at No. 35 is Seamus Casey, another offense-oriented right-shot defenseman. I gave him serious consideration, but after drafting Nemec, I’d wager the Kraken would prefer to go in another direction if a roughly comparable player is available. It so happens there is such a player; and, in a bizarre coincidence, it is Nemec’s HK Nitra teammate Adam Sykora. Sykora is one of the youngest prospects available in the draft and receives raves for his motor, hockey IQ, and defensive game. With projectable offensive tools, there is a high floor as a well as a moderate ceiling that is enticing in the second round. To my untrained eyes, he was fun to watch at the IIHF World Championship. Easy to imagine him taking the baton from Yanni Gourde as a feisty, difficult-to-play-against player in a few years.

Round 2. Pick 49: Mock Trade to Edmonton

Notes: Lund has been singled out by a few draft analysts for his high upside, but he also brings a strong baseline of tools as a 6-foot-2 right-shot center. For this reason, it would not surprise me if a team reached for him ahead of his Big Board rank on draft day. If so, Devin Kaplan, a 6-foot-3 winger for the US National Team Development Program, would be a fine consolation prize. But Lund is the preferred pick due to his ability to play center. I bet the Kraken would like to come out of the first two rounds with at least one center prospect. (I also like center prospect Adam Ingram or the Youngstown Phantoms, mentioned above, but he is projected to be off the board at No. 54.)

Notes: Christian Kyrou, younger brother of Jordan Kyrou, is a right-shot defenseman who has displayed strong transition and offensive zone skills in the OHL. It is not difficult to imagine Nemec and Kyrou running the two power play units five years from now. His offensive skills give him a baseline of NHL value, even if his defensive deficiencies have to be sheltered in a third-pair even-strength role. If he can refine the defensive aspects of his game over time, a Sam Girard or Torey Krug-type upside could be there.

Notes: Potentially an underexposed prospect, Moldenhauer’s early season was derailed by injury. When he finally regained his form, he was a consistent scoring threat in the USHL, primarily winning with his skating, agility, and puck handling. Since scouts also noted above-average defense from Moldenhauer, there may be an all-around package that projects into a team’s middle six if all goes right with his development.

Notes: One of the youngest draft-eligible players, scouts suggest that he already thinks the game and competes at a high level. He also displays a willingness and ability to win in the physical areas. With average-or-better tools across the board, and a long development runway ahead, Petrovsky seems to carry a desirable combination of a high floor and a ceiling as a relatively skilled bottom-six NHL forward. His teammate on the Owen Sound Attack, Cedrick Guindon, would be a nice alternative here.

Notes: Now officially in the back half of the draft, this mock draft version of the Seattle Kraken finally considers a Russian prospect. And Pelevin is worthy of the risk. Elite Prospects Russian area scout Dylan Griffing ranks Pelevin as his fifth-best Russian prospect in this draft, ahead of many others that could be drafted much higher. Pelevin is credited for his defensive game, but he also can threaten in all three zones with above-average skating. Some scouts see a strong projection to a third-pair role, with the potential for more. Obviously, that would be a terrific result at the end of the fourth round.

Notes: Thornton produced points from the blue line as an 18 year old in the WHL at a rate behind only top prospects Kevin Korchinski and Denton Mateychuk. And on a team that generally struggled defensively, Hudson nevertheless received solid reports on his play in his own zone. I’ll be curious to track Thornton’s development because he seems like one of the prospects most underrated by the scouting community.

Notes: Richard is a very young winger whose playmaking ability and production progressed significantly from the beginning of the season to the end, according to scouts. Over the final 40 games, he produced 45 points, a pace very similar to analytics darling Nicholas Moldenhauer. If the progress was real from the young player, there might be a good deal of upside in Richard as a sixth-round pick. Regardless, the development path will be a long one.

Notes: After a really tough year in the OHL last year, Malik had a stellar year in the top Finnish league, Liiga, this year, where he ranked in the top five in save percentage. In isolation, this was one of the more impressive seasons from a draft-eligible goalie. But the full resume is checkered. The glimpse of upside may be enough for a Seattle team that needs to develop a goalie pipeline. Alternatives include talented-but-undersized goalies Sergei Ivanov of SKA-1946 St. Petersburg in the MHL or Thomas Milic of the Seattle Thunderbirds in the WHL. The top picks at the position will likely go off the board in the second or third rounds.

Notes: King led the WHL in goals and plays a physical two-way game as a right-shot center. There is a lot to like about this prospect. If he goes undrafted, the Kraken could offer prime playing time in Coachella Valley and the opportunity for more. He would be a good signing.

Notes: A small but productive goal scorer, McClennon did not sign with the Flyers after being drafted previously. If he goes undrafted this year, he would be eligible to sign with any club and join their AHL team. Similar to the pitch to King, the Kraken can offer a strong opportunity for AHL playing time and maybe more down the road. He would be a solid depth add to the organization.

Notes: This likely wouldn’t be a Kraken signing, but perhaps a signing by the Americans of the ECHL. The organization may target an additional free-agent goalie that they can get into their system sooner rather than later with the promise of an opportunity to compete for an ECHL role. Constantini is one a few candidates who could fill this kind of depth role.